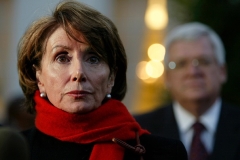 (CNSNews.com) - House Speaker Nancy Pelosi (D-Calif.) said on Tuesday that she did not have advance knowledge that the FBI was executing a search warrant on Donald Trump's Palm Beach home, leaving with some ten boxes of material.

"It will be interesting to find out exactly what the warrant was, what the order was to have a search warrant and for what purpose. But again, we can only speculate," she told NBC's "Today" show.

She did not question the unprecedented move by the FBI and Biden Justice Department, searching the home of a political rival of the sitting president. Nor has Pelosi commented on the FBI seizure of Rep. Scott Perry's cell phone.

The Pennsylvania Republican said in a statement obtained by Fox News that he was "outraged" by the seizure on Tuesday:

"This morning, while traveling with my family, 3 FBI agents visited me and seized my cell phone. They made no attempt to contact my lawyer, who would have made arrangements for them to have my phone if that was their wish. I’m outraged — though not surprised — that the FBI under the direction of Merrick Garland’s DOJ, would seize the phone of a sitting Member of Congress," Perry said in his statement.

"My phone contains info about my legislative and political activities, and personal/private discussions with my wife, family, constituents, and friends. None of this is the government’s business."

No immediate comment from Pelosis on either case, but it was a different story in May 2006, when the FBI conducted its first-ever search of a congressional office as part of an investigation into bribery allegations against then-Rep. William Jefferson, a Louisiana Democrat.

In a joint statement on May 24, 2006, then-Speaker Dennis Hastert (R-Ill.) and then-Minority Leader Pelosi (D-Calif.) said the Justice Department "was wrong to seize records from Congressman Jefferson's office in violation of the Constitutional principle of Separation of Powers."

Here is the full statement, as transcribed by Business Insider. The statement apparently is no longer available on Pelosi's website.

"No person is above the law, neither the one being investigated nor those conducting the investigation.

"The Justice Department was wrong to seize records from Congressman Jefferson's office in violation of the Constitutional principle of Separation of Powers, the Speech or Debate Clause of the Constitution, and the practice of the last 219 years. These constitutional principles were not designed by the Founding Fathers to place anyone above the law. Rather, they were designed to protect the Congress and the American people from abuses of power, and those principles deserve to be vigorously defended.

"In addition, the Justice Department must immediately cease any further review of the documents it unconstitutionally seized, ensure that those who have reviewed the documents do not divulge their contents to the investigators, and move in Court to vitiate the search warrant."