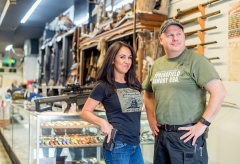 Lauren Boebert poses at a gun store in Rifle, Colorado on April 24, 2018. Boebert opened Shooters Grill with her husband in the small town in 2013. She's a newly elected member of Congress. (Photo by EMILY KASK/AFP via Getty Images)

(CNSNews.com) - Colorado's newly elected U.S. Republican Rep. Lauren Boebert on Tuesday described herself as "a 34-year-old woman who wants to protect herself in this dangerous city, here in our nation's capital" -- by carrying a gun.

"You know, it's very interesting that here in the United States of America that there is so much controversy over our Second Amendment rights," Boebert told "Fox & Friends" on Tuesday morning.

It's right there in our Constitution. It's an amendment to our Constitution. And there's an absolute uproar over...wanting to defend myself. Come on, I'm 5-foot-zero, I'm 100 pounds. I'm in now one of the most dangerous cities in America. The violent crime rate here is 158 percent times higher than the national average.

I will be walking alone a lot. Just like I say in my ad, being a member of Congress is pretty basic. I don't go to work in an armored vehicle. I don't have personal police escorts. I am my own security here. And my most basic right is the right to defend myself.

Boebert, the owner of a "gun-themed restaurant" in Rifle, Colorado (as the Denver Post described it) is allowed, as a member of Congress, to carry a gun in the Capitol, except in certain restricted areas.

But getting to and from the Capitol with her gun could be a problem, the new Washington Metropolitan Police Chief Robert Contee told reporters on Monday. "There are no exceptions" for carrying a concealed weapon in D.C. streets, he said:

"We plan to reach out to the congresswoman's office to make sure that she is aware of what the laws of the District of Columbia are, what the restrictions are. And that congresswoman, whoever it is, I guess it was from Colorado, will be subjected to the same penalties for anyone else that's caught on the District of Columbia street carrying a firearm. Unlawfully, I might add."

D.C.  Mayor Muriel Bowser told the same news conference on Monday, "It angers me, actually, that any elected official would incite violence, put our city at risk, to put these men and women in law enforcement at risk, our residents at risk, and our beautiful city at risk. And I call on them to stand down on--on that activity, regardless of their political views."

Bowser made it seem like Boebert would be using her gun in anticipated street protests on Wednesday, which is not the case at all.

Yesterday was the newly appointed chief of police very first day on the job. He was just appointed on Saturday. And that's his first order of business is to come after a 34-year-old woman who wants to protect her in this dangerous city here in our nation's capital.

Maybe I should make a video announcing that I plan to drive a car in Washington, D.C. And then the chief of police will say that he is going to inform me about Washington, D.C.'s traffic laws. Is this what he does to everyone who comes into the District of Columbia, inform each and every person of their laws? I don't think so.

Boebert said she's already applied for a "shall-issue" permit, and she said "there is no question" that she will be able to carry a concealed weapon in Washington, D.C.