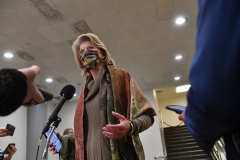 Sen. Lisa Murkowski (R-Alaska) talks with reporters during a break on the 2nd day of Donald Trump's second impeachment trial on February 10, 2021. (Photo by NICHOLAS KAMM/AFP via Getty Images)

(CNSNews.com) - Watching videotapes of a mob storming the U.S. Capitol made Sen. Murkowski "angry," "disturbed" and "sad," she told reporters at the Capitol on Wednesday.

Asked if the attack was "completely Donald Trump's doing," Murkowski said, "I think that -- that the House managers are making a very strong case for a timeline that laid out very clearly -- with the words that were used, when he used them, how he used them -- to really build the -- the anger, the violence that we saw here in this Capitol."

Another reporter asked Murkowski if there's any doubt in her mind that "Donald Trump incited insurrection."

"I have said I will look to the evidence that is presented. The evidence that has been presented thus far is pretty damning, but I also know that I have an obligation, a responsibility, and one that I accept, to listen to what the defense will present. And so we'll have an opportunity to do that in a day or so.

"But today, again, I think the series of videos that we've seen, again, a reminder of what we all lived through, and unfortunately what some did not live through -- is -- is greatly, greatly disturbing."

Murkowski said with or without a conviction, she doesn't see "how Donald Trump could be re-elected" after Americans see "the full story laid out here."

"We're reliving this," she said. "We lived it once, and that was awful. And we're now reliving it with a more comprehensive timeline. I know what I was feeling in the Senate chamber when I could hear those voices; I knew what it meant to be running down this hallway with my colleagues.

"I wasn't fully aware of everything else that was happening in the building, and so when you see all the pieces come together, the -- just the total awareness of that, the enormity of this -- the threat, not just to us as people, as lawmakers, but the threat to the institution and -- and what Congress represents. It's disturbing -- greatly disturbing."

Murkowski said Republican senators are under no pressure whatsoever from their leaders to vote for or against impeachment. She said she "absolutely" feels free to vote her conscience.

Murkowski is one of six liberal Republican senators who voted on Tuesday to proceed with Trump's second impeachment trial, rejecting the argument by Trump's lawyers that impeaching an out-of-office president is unconstitutional.

In a statement released Tuesday, Murkowski explained her vote as a defense of the Senate's authority to check the Executive Branch:

The debate over the constitutionality of convicting former federal officers has been going on since 1797, when Senator William Blount was found to have engaged in a plot to help Great Britain take control of the Spanish territories of Louisiana and Florida. However, it was not until 1876 that the Senate first clearly asserted jurisdiction over a former official during the trial of William Belknap, who served as Grant’s Secretary of War.

While the Constitution does not speak directly to the issue of impeachment of a former president, the Senate is given the ‘sole power to try all impeachments,’ and the power to ‘determine the rules of its own proceedings.’

These two provisions give the Senate wide discretion when deciding whether and how to hold a trial of impeachment.  Article I, Section 3 of the Constitution does not provide removal as the sole remedy during an impeachment proceeding, it also provides for disqualification from holding future offices.  When combined with the tradition of “late impeachments” in England and the precedent established in 1876 during the Belknap trial, I am convinced that this body retains jurisdiction over former officials.  The majority of constitutional scholars who have considered this question agree with this position.

Moreover, the Senate should want to retain that authority. The American people should also want it to do so.  If a civil officer could escape any punishment simply by resigning office, the impeachment power would be rendered toothless. If the end of a President’s term meant he or she would never be held politically liable for high crimes or misdemeanors committed while in office, the lame-duck period would pose a serious danger to the stability of the country.

The vote today was not about President Trump. It was about the Senate retaining jurisdiction to try a former official who was impeached while in office for acts done while in office. The Senate should not be so quick to forever give away its power to take corrective actions that may, at some point, be necessary.  The Legislature must serve as a check on the Executive. Limiting this branch’s authority is not a precedent I will set.