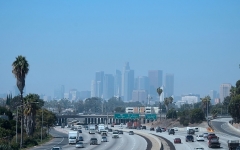 (CNSNews.com) - "Victims of environmental crimes...have received insufficient support for too long," Acting Associate Attorney General Matthew Colangelo said this week, as the Biden Justice Department and Environmental Protection Agency announced a new program to "seek justice for all of these victims."

"The Department of Justice and EPA are pleased to formally announce the creation of the nation’s first-of-its-kind Environmental Crime Victim Assistance Program," Colangelo said in a speech in Washington.

Colangelo said the program was created after "several years of outreach" and examination of "on-the-ground needs and barriers to upholding rights and accessing services."

"We listened and learned from victims, from victims’ rights professionals and from those working on environmental crimes investigations and prosecutions," he said.

The program will help ensure that victims of federal environmental crimes are properly identified, that their rights are protected, and that they receive services from the opening of an investigation through the prosecution of the case.

Both agencies will have the infrastructure to ensure we meet our obligations to victims through the creation of victim-witness coordinator positions, specialized training and job aides, and outreach to victims and victims’ rights professionals.

(This will expand government, in other words.)

"Victims of environmental crime have long been an underserved and often overlooked type of victim in our criminal justice system," Colangelo said.

He gave a few examples of who the program will help:

Some are casualties of large-scale, high-profile incidents like the Deepwater Horizon disaster or the Volkswagen emissions scandal. But the majority are victims of crimes that receive much less public attention:

-- The low-wage worker given no or inadequate protective gear and exposed to asbestos fibers from a renovation or demolition project;

-- The farmworker exposed to an illegal application of a pesticide;

-- The family whose exterminator illegally applies pesticides and causes permanent brain injury to children in their home; and

-- The community located near a cluster of industrial facilities, where one polluter knowingly violates the law by exposing that community to carcinogens while the other facilities follow the law.

We serve and seek justice for all of these victims.

"President Biden and the Attorney General understand that the brunt of the harm caused by pollution and climate change is often borne by communities of color and low-income communities,” he continued.

“Within his very first week on the job, President Biden directed federal agencies to develop programs and policies to ‘address the disproportionately high and adverse human health, environmental, climate-related, and other cumulative impacts on disadvantaged communities.’”

Indeed, President Joe Biden came into office promising to "eliminate systemic racism," and promising that "every branch of the White House and the federal government is going to be part of that effort."