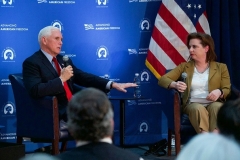 (CNSNews.com) - "We are in the midst of the worst border crisis in American history," Former Vice President Mike Pence told Fox News's Brian Kilmeade on Saturday.

"I don't have to tell your viewers they know that. But by announcing yesterday (Friday) that they're going to rescind Title 42 that our administration implemented allowing us to return people immediately across the border to Mexico is going to -- it's going to take -- it's going to make the worst border crisis in American history even worse," Pence continued:

"There are some estimates that 7,000 illegal immigrants are coming across the border every day now. It could be as many as 18,000 and look, I've got to tell you, this is -- you talk about -- I think Republicans and conservatives need to have a solid agenda.

"We just published one in the Freedom Agenda, but make no mistake about it, the radical left is in the saddle in the Democratic Party, and they are an open borders policy and whether it be when they stopped building the wall, when they ended remain in Mexico, this latest step of repealing Title 42, I think is all about advancing their open borders policy to the great detriment of the American people."

Even some "moderate" Democrats support the lifting of Title 42:

Rep. Suzan DelBene (D-Wash.) chairs the New Democrat Coalition -- a group of 98 "solutions-oriented" Democrats who seek "to bridge the gap between left and right."

She told "Fox News Sunday" that she supports the lifting of Title 42, the public health measure that has kept many would-be illegal immigrants out of the country. The Biden administration plans to lift the order on May 23:

"Do you think this is a move that could hurt your party?" host Martha MacCallum asked DelBene:

"Well, I think this was a policy that was put in place to address the public health crisis, and it needs to be driven by the science. The CDC is making the decision on this. I support that decision. It won't go in place until May 23rd, and we have to make sure that we're not using that public health policy to undermine our immigration laws."

In response to a follow-up question, DelBene said she thinks the Title 42 decision "needs to be driven by the science, and I support the CDC's decision."

Pence, who appears to be considering a run for president, unveiled his "Freedom Agenda" last week.

He calls it a "compelling, positive vision built on our highest ideals," border security among them:

"I first got involved in politics when Ronald Reagan was President. That's first time I ran for office and had the privilege of meeting President Reagan, and then I had the opportunity of being Vice President with President Donald Trump," Pence said.

"But all along the way, it was the American people advancing American ideals, traditional values, and a strong military. I mean, the very idea that that free market economics is at the very core of American prosperity, all became, you know, all became essentially bequeathed to the Republican Party.

“But when President Trump came to office, we added border security, we added fair trade, we added the importance of patriotic education, school choice, and of course, we changed the national consensus on China.

"What I did was bring together about three dozen of the top conservatives in the country and said: Can you lay out for us what that agenda is from Reagan to Trump? Because I really believe this is a movement...that has always been animated by ideas.”

Pence urged people to take a look at his Freedom Agenda: "And I think they will see the very ideas that carried us to the White House in 2016, carried Ronald Reagan in in 1980, and frankly, that's the pathway back for a stronger, more prosperous America built on our highest ideals."