McConnell: 'We're Not Interested in Revenue Replacement for State Governments' 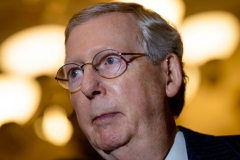 (CNSNews.com) - Four relief bills totaling trillions of dollars are not enough for Democrats, who are now insisting on a fifth bill to bail out state and local governments.

Also on Wednesday, McConnell told radio host Hugh Hewitt, "I would certainly be in favor of allowing states to use the bankruptcy route." The comment drew outrage from some of the nation's governors, who are clamoring for a federal bailout.

The most recent "Phase 4" relief bill, which the House will pass today, includes $310 billion for small businesses and their employees, $75 billion for hospitals, and $25 billion for coronavirus testing.

"What they (Democrats) really wanted to do was to pass legislation to send money down to states and local governments. And what I said was, we're not going to do that," McConnell told Fox.

McConnell said he'll wait until all the members of the Senate are back in Washington to consider any more legislation.

"What I'm saying is, we're going to take a pause here," McConnell repeated:

We're going to wait at least until May the 4th, which we -- is the time we're going to have everybody back in the Senate, and clearly way before we provide assistance to state and local governments, who would love for us to borrow money from future generations to make sure that they have no revenue losses -- before we make that decision, we're going to weigh the impact of what we've already added to the national debt and make certain that if we provide additional assistance for state and local governments, it's only for corona-related -- coronavirus-related matters.

McConnell indicated he's not convinced there needs to be another rescue package:

I mean, the ultimate solution to this is to get the economy back up and running. I'm encouraging our governor, for example, and he's already doing it, to being to make steps in the direction of opening up the economy.

The solution to the hospital problem is elective surgery, which is the only place they're making any money. That's a state decision.

So all of us are going to be encouraging our states to begin to move in the direction of getting back to normal, bearing in mind the advice that Dr. Fauci and Dr. Birx -- social distancing, the de-stigmatization of wearing a mask. Nobody should be embarrassed to wear a mask.

And let's ease back in and solve the problem by getting growth back in our economy.

Washington Gov. Jay Inslee, a Democrat, told CNN on Wednesday that governors of both parties have seen their state economies "hammered."

And Republicans and Democrat governors both have been very adamant with the president -- and I have been on multiple calls with him -- that our states are not going to be able to provide the services that our people need in this emergency unless they get some emergency help from the U.S. Congress.

So this is not a moment where ideology should prevent us from getting health care to our people or housing to our people or foodstuffs to our people. These are basic necessities that are jeopardized by Mitch McConnell and the president's apparent position this.

I don't understand this, because even the Republican governors get this. I think this is the difference between people who really have responsibility for the health of their citizens -- and those are governors -- and Republican senators, who want to make this some kind of ideological argument.

This is not a moment for ideology about the proper role of government. This is an argument about whether people are going to have food to eat in our states. So, I'm hopeful that the Congress will act on this on a bipartisan basis.