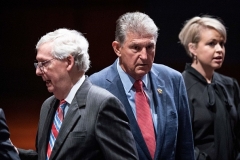 (CNSNews.com) - If Sen. Mitch McConnell (R-Ky.) once again become majority leader following the midterm election, what would the first 90 days look like?

"Well, we will be looking for things that we can do for the country, no matter who's in the White House," McConnell told Fox News's Bret Baier Wednesday night.

"But I think you can say this. If there's a Republican House and Senate next year, Joe Biden will finally become the moderate he promised the American people he would be when he ran for president, because he would have no choice."

"I think, just because you have a closely divided government, doesn't mean you do nothing," McConnell said.

"The past two administrations tried to achieve bipartisan infrastructure, didn't get it done. We needed to rescue the post office.

"Just because there's a Democrat in the White House, I don't think means Republicans should do nothing that's good for the country in the meantime. On the big issues, we're totally opposed to what this administration is trying to do.

"But on things like school safety, mental health, infrastructure, postal reform, why would we not want to make progress for the country, no matter who's in the White House?"

As Senate Democrats now press for passage of a reconciliation bill dubbed the Inflation Reduction Act, McConnell said not a single Republican will vote for it. Until now, Democrats couldn't muster enough support to bring it to a vote.

But then Sen. Joe Manchin (D-W.Va.) changed his mind. (It remains to be seen whether Democrat Sen. Kyrsten Sinema will follow Manchin's flip-flop.)

"Well, first, I think all of us were somewhat shocked by Senator Manchin's reversal of positions he had taken as recently as last week against raising taxes," McConnell said.

"It increases the burden of taxation on lower-income people significantly. The -- calling it an inflation reduction bill is rather laughable. Independent analysis indicates it actually increases inflation in the next two years and may have an impact over 10 years.

"And their policies from last year have already produced 40-year-high inflation. So it's a terrible package. It appears as if they're all in line but one. And it'll be up to Senator Sinema from Arizona, who's quite independent, to determine what the final contours of the bill are."

McConnell said there's nothing Senate Republicans could have done to prevent the Democrats from advancing a bill that only they will vote for.

"So it's not a question of being played here.

"What's the story line here is that Senator Manchin has agreed to something that he had said publicly and privately over the last two weeks he could never agree to.

"We're not involved in the reconciliation bill. There won't be a single Republican vote for it. There's nothing we can do to deter it, other than to criticize it publicly. And that's what we're doing right here."

Baier also asked McConnell what he views as the bigger national security threat -- the open southwest border or the war in Ukraine?

"I don't think you have to pick. I think they're both important," McConnell said.

"I mean, we both need to secure the border, which the previous administration did an excellent job of. And we need to beat the Russians in Ukraine. It's important to do that. The prime minister of Japan, concerned about President Xi and China, said, you want to send Xi a message, defeat Putin in Ukraine."