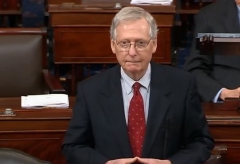 (CNSNews.com) - Two Senate committee recently authorized subpoenas as part of their investigations involving Burisma/Hunter Biden as well as the origins of the Trump-Russia-FISA abuse.

House Speaker Nancy Pelosi this week called the Republican subpoenas "a clear act of retaliation and political retribution intended to help the President keep his job."

I'd say to the Speaker, after the impeachment, you -- you're not in a position to be lecturing us about what the appropriate use of Senate time is.

Look, this is the legitimate oversight responsibility of the Senate.

There was a lot of apparent misbehavior going on in the opening of those investigations into General Flynn and others. And so Ron Johnson, the head of Homeland Security, has got subpoenas out for Hunter Biden.

Lindsey Graham, the chairman of the Judiciary Committee, has laid out a series of hearings and people that he wants to call to come testify. If--if the House can spend time on a baseless impeachment effort, then we should at least have oversight over what happened to initiate this whole process a couple of years ago.

The Senate Homeland Security Committee this week voted to authorize Committee Chair Ron Johnson to subpoena Blue Star Strategies, a Democrat public-relations firm that did consulting work for Burisma, the Ukrainian energy company that put Hunter Biden on its board of directors at a time when Hunter's father was serving as vice president.

The committee is probing whether Blue Star used Biden's position at Burisma to communicate and meet with Obama administration officials with the goal of influencing U.S. policy.

According to Sen. Johnson, Blue Star was hired by Burisma, "the corrupt oil company, to burnish their image here and to use their connections...It is not my fault that Hunter Biden and Joe Biden are somehow connected to a very corrupt oil company and that Blue Star Strategies represented them."

Also this week, Senate Judiciary Committee Chairman Lindsey Graham (R-S.C.) announced that he would seek subpoena authorization related to the FISA abuse investigation and oversight of the Crossfire Hurricane investigation.