McCaul: 'My Concern Is, There's No Deterrence...Weakness Invites Aggression' 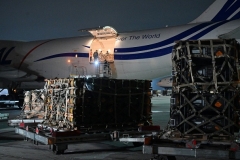 (CNSNews.com) - Russia's intention to invade Ukraine is plain for all to see, Rep. Michael McCaul (R-Texas) said on Wednesday. He says the administration is more worried about how to respond to a Russian invasion than it is about how to prevent one:

"Well, I have seen the plans, the Russian plans," McCaul told Fox News:

They are very aggressive, a very aggressive timetable. When you look at the troop deployments, they are surrounding Ukraine with very -- a lot of troops, 100,000, 75,000 more on the way, tanks, artillery, now joint exercises in Belarus.

It's getting very serious. And the time -- the time is running out. My concern is, there's no deterrence. And we all -- we know from history that weakness invites aggression.

Neville Chamberlain and Hitler demonstrated that. Reagan talked about peace through strength. And every time we talk to the administration -- I just got off a phone call with the secretary and the leadership. And it's always, what are we going to do after an invasion, not what are we going to do to stop an invasion from happening in the first place?

McCaul, the ranking member of the House Foreign Affairs Committee, said the Biden administration's decision to pull non-essential employees out of the U.S. embassy in Ukraine "sends a message about...how high the threat level actually is."

He said diplomacy is the first option, but without a military backup to the "tough rhetoric," "it doesn't mean anything."

McCaul said the Biden administration is wrong to let Russian President Vladimir Putin dictate the terms, including the demand that NATO stop its eastward expansion.

"He's dividing and weakening NATO. He is showing a force on the border. What we need to be doing is sending more lethal military aid to Ukraine. And I have legislation to do that. I think it actually could be bipartisan," McCaul said.

And I also think that we need coalition forces in eastern NATO countries like Poland and the Baltic states to show Putin that we're serious. If we don't do this, an invasion is certain. And then what's going to happen after that? There's no plan for a post-invasion of Ukraine.

And why is it so important to the American people? Because, after Afghanistan, there was such a projection of weakness by President Biden, that our foreign adversaries became emboldened. And now they're testing this president.

Putin's always wanted Ukraine, the breadbasket of Russia. Energy is a big part of this, to control the Black Sea. President Xi would love to take over Taiwan. The ayatollah is building a bomb. And Kim Jong-un just fired off two rockets this month, claiming he has hypersonics.

McCaul warned that China's President Xi is watching what happens with the U.S.-Russia-Ukraine tangle:

"If we look weak, if we don't project strength, and Putin invades Ukraine, which is likely -- I hate to say that -- he will take that as a signal that now he can go into Taiwan with no consequences.

I always find that, if you have consequences to bad behavior, you stop bad behavior. We're not seeing that right now. Of course, President Xi will wait until after the Olympics before he makes this type of move.

But just similar to what's happening in Ukraine, we're also seeing Taiwan be surrounded on the sea and the air by forces of the CCP in a very strong projection of force. We have to show deterrence in the region, both in Eastern Europe, but also in the Indo-Pacific.