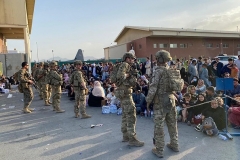 US soldiers stand guard as Afghan people wait to board a US military aircraft to leave the country on August 19, 2021. (Photo by SHAKIB RAHMANI/AFP via Getty Images)

(CNSNews.com) - "The intelligence community did not say back in June or July that, in fact, this was gonna collapse like it did," President Joe Biden told ABC's George Stephanopoulos this week.

Biden said it was a question of timing -- that the Taliban would take over, "but not this quickly. Not even close," Biden said.

Likewise, Joint Chiefs Chairman Gen. Mark Milley told Americans on Wednesday, "There was nothing that I or anyone else saw that indicated a collapse of this army and this government in 11 days.

Neil, and I hate to be so strong, but it's a lie. If I'm getting these briefings, I'd sure as heck hope the president of the United States is.

And the fact is, the I.C. assessment, Neil, all summer long has been very, very grim, that the Taliban was going to overrun the country, the Afghan army would fall without our air cover. And, somehow, the president blames the intelligence community.

This is absolutely a lie. The I.C. was correct in their assessment, and it was very grim. And they had a six-month and 90-day assessment. And the fact is, they chose to ignore the intelligence community. And he ignored his top generals, by the way, in my judgment.

And Milley is a -- I have known him for a long time. I'm a little disappointed that he would say something like that, that they had no warning in advance about this.

I certainly did, just in my position in Congress.

McCaul conceded that the fall of Afghanistan "did happen faster -- even faster than the I.C." assessment.

"But the point is, it was a very grim assessment. The State Department kept going back to this rosy picture of, oh, we're negotiating with the Taliban in Doha. Everything's going to be fine. We're -- you can't negotiate with the Taliban."

McCaul said he'd spoken with former Secretary of State Mike Pompeo earlier on Thursday. Both Pompeo and Trump spoke directly with the Taliban, something the Biden administration refused to do:

And the idea that somehow this is Trump's fault and that President Trump -- that his February agreement had something to do this, what Pompeo told me was, they were in constant contact. And when they violated the agreement, like not cutting ties with Al Qaeda or hitting provincial capitals, there was an immediate, swift response with air support. They were bombed.

And the problem is, we have a weak president now who has unleashed the Taliban on this country. And what I fear for the most are the women left behind and the state that they're going to be put in when they're enslaved and treated like property.

McCaul said Congress will have a classified briefing next week, and he expects a public hearing "probably when we return in September."

We obviously have a lot of questions to ask from this administration. It's been, in my view, Neil, a real dereliction of duty by the commander in chief. He has a stain on this presidency with this ill-conceived evacuation, which is utter chaos at the airport.

My numbers are that they're 10,000 to 15,000 Americans, and only 20 percent of those have actually escaped out of the Kabul airport. Meanwhile, the Taliban has circled the perimeter and are beating people with chains as they try to get into the perimeter to get on one of these flights.

You already -- Kirby, the spokesman for the Pentagon, had no idea who were even on these flights. And I'm getting also reports that some of these flights are only half-full. They're half-empty.

How does this happen? There was no planning.

McCaul called it "embarrassing and pathetic that the United States of America has an unconditional surrender to a terrorist organization, and then begging them to please back off of our evacuation.

"And they got caught flat-footed. We warned them last summer to start preparing. If you're going to do this, do it right. Have the SIV (Special Immigrant Visa) applicants, have the American citizens, have the planes ready to go."

McCaul said the international community views the U.S. as a weak country now: "It's impacting our status around the world, a failed leadership."

He also bemoaned the loss of critical intelligence with the shutdown of Bagram Air Base, which means our ISR (Intelligence, Surveillance, Reconnaissance) capability has gone "dark."

The intelligence not only helped the U.S. track terrorist activities in Afghanistan, he said, but it also allowed us to see threats from China, Russia and Iran.

"Neil, we cannot see the threats coming out of the region now. And when I talked to the commanders and the veterans, this is really putting us in a very compromising situation," McCaul said.