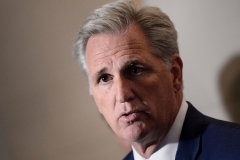 (CNSNews.com) - In his opening remarks to the 117th Congress on Sunday, January 3, House Republican Leader Kevin McCarthy took a swipe at the 116th Congress, then said he sees worrying signs for the new session:

"I wish I could say that the (Democrat) majority in Congress is committed to changing for the common good and focusing on what really matters," McCarthy, a California Republican, said. "But I'm concerned about the early actions are pointing in the wrong direction."

McCarthy pointed to proposed House rules changes to be voted on today (Monday).

Tomorrow, this majority of the new 117th Congress plans to adopt new rules that would silence our constituents' voices in Congress. Those rules throw away for more than 100 years of representation in our nation’s capital by effectively killing a key opportunity to amend legislation.

Worse, they would penalize any member who shares news or views that maybe our allies in the media deem fake. They actually make it an ethics violation, which is usually reserved for such unbecoming conduct as bribery or corruption.

Under these rules, all members are equal, but some are more equal than others. For our constituents, it means freedom of speech is silenced. Good ideas are stifled. And dissent is punished.

Why would an American political party use this as your first action in Congress? Perhaps they feel the urgency to protect their political careers.

McCarthy noted that the Democrats' majority is slimmer than it was in the last Congress because voters have said "enough."

The proposed rule changes to which McCarthy referred include the following, verbatim:

PRESERVES AND REFORMS THE MOTION TO RECOMMIT

Prevents a tool meant to improve bills from being used to hijack the legislative process for political gamesmanship. By eliminating specific instructions, this rules package retains the motion while preventing its abuse.

According to House Democrat archives, "The motion to recommit provides one final opportunity for the House to debate and amend a measure, typically after the engrossment and third reading of the bill, before the Speaker orders the vote on final passage. The motion is the prerogative of the Minority party and in many cases constitutes the Minority’s one opportunity to obtain a vote on an alternative or a proposal to improve the measure."

The other rule change McCarthy opposes is a supposed crackdown on "deep fakes."

This rule "[m]akes it a violation of the Code of Official Conduct for a Member, Delegate, Resident Commissioner, officer, or employee of the House to disseminate manipulated media, including photos and videos, without making a reasonable effort to determine if the media is distorted or manipulated."

116th Congress ‘was on the sidelines’

McCarthy, in his review of the 116th Congress, said it suffered from "neglect."

In this chamber two years ago, the Speaker spoke of a new dawn for the middle class. But for the next two years, the majority was consumed with everything else. During some of the most challenging times for our country, I felt Congress was on the sidelines.

When the need for more pandemic relief was obvious, did we deliver a timely lifeline America needed? Or did we say nothing was better than something until politics dictated our actions?

When unrest spilled into the cities and communities across the country, did we deliver safety that Americans wanted? Or did we let calls to defund the police intimidate us from protecting life, liberty and prosperty?

When Americans relied on essential workers to keep our country moving, did we serve the people's House in a way Americans deserved? Or did we shrink and reward members who stayed home, skipped work, and still got paid? The unfortunate answers to these questions underscore why the last Congress was the least productive Congress in 50 years.

It has been said that a House divided cannot stand. Well, if there's any lessons that Americans have learned in the last two years, it is this. A House distracted cannot govern. I wish I could say that the majority in Congress is committed to changing for the common good and focusing on what really matters.

But I'm concerned...that the early actions are pointing in the wrong direction.