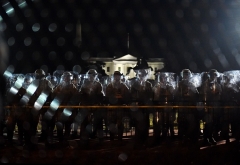 Police officers hold a perimeter behind the metal fence erected in front of the White House to keep protesters out during the sometimes violent protests sparked by the death of George Floyd. (Photo by OLIVIER DOULIERY/AFP via Getty Images)

(CNSNews.com) - To hear D.C. Mayor Muriel Bowser tell it, there was no violence associated with the late-May, early-June protests over George Floyd's death in the capital city:

"It was here that just weeks ago, Americans donned face masks and safely and peacefully protested the death of George Floyd," Bowser told the Democrat National Convention on Monday night.

"But while we were peacefully protesting, Donald Trump was plotting. He stood in front of one of our most treasured houses of worship and held a Bible for a photo op. He sent troops in camouflage into our streets, he sent tear gas into the air and federal helicopters, too."

What Bowser failed to mention was the fact that protesters tried to burn down St. John's church -- that "treasured" house of worship -- on May 31, the evening before President Trump held his much-criticized photo-op.

-- The White House was locked down on May 29 as protesters tried to storm the gates, and at one point, the Secret Service ordered President Trump to go to an underground bunker, fearing for his safety.

-- Protesters damaged police cars and defaced monuments the next night, Saturday, May 30. Attorney General William Barr issued a statement on "the rioting that is occurring in many of our cities," and he blamed "outside radicals and agitators."

-- On May 31, looters broke into stores and businesses in the District of Columbia. Attorney General Barr issued another statement, saying "the voices of peaceful and legitimate protests have been hijacked by violent radical elements...It is time to stop watching the violence and to confront it and stop it." Barr said federal law enforcement would be directed to apprehend and charge "the violent radical agitators."

-- On June 1, Mayor Bowser told NBC's "Today" show, “We recognize that people are frustrated and mad, but tearing up our beautiful city is not the way to bring attention to what is a righteous cause."

During the late-afternoon of June 1, to make the point that he was serious about restoring law and order, President Trump rounded up some of his Cabinet members to walk with him across Lafayette Square to the fire-damaged St. John's church. The Secret Service cleared a path for him by using pepper spray to move protesters out of the area, a move that outraged many people who are perpetually outraged at Trump for any reason.

As Bowser said of Trump in her speech to the virtual Democrat National Convention:

So I created Black Lives Matter Plaza, right behind me, as a place where we can come together to say, enough.

Bowser said we can't just say "black lives matter," we have to "live those words."

"We have to undo the laws and systems that have codified racism for far too long." She urged all Americans to "challenge our own biases."

In a June 2 news release, Attorney General William Barr agreed that "last night (June 1) was a more peaceful night in the District of Columbia." But he credited "federal and local law enforcement" working together, making "significant progress in restoring order to the nation’s capital."