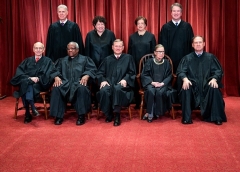 (CNSNews.com) - In three tweets on Thursday, conservative talk show host Mark Levin explained how the Supreme Court's 7-2 decision on the president's tax returns could (and should) come back to haunt the justices:

"The Supreme Court just opened itself up to congressional demands for the individual justices' tax returns," Levin tweeted shortly after the ruling was handed down.

"I can see a situation in which the House or the Senate decides that it must have access to all of the justices' tax and financial records each year to determine if they're influences in any way to write the decisions they write or vote the way they vote on numerous cases.

"The justices will not be able to argue that they are immune as a matter of separation of powers as they just shot down that argument as applies to the president."

Later, on his radio show, Levin offered a fuller discussion of the ruling by the "seven politicians" on the court:

"So here's my question," Levin said:

What if Congress were to ask Supreme Court justices for their tax returns? They say they have a legislative purpose, and they do.

Supreme Court justices are handling all kinds of cases -- financial, anti-trust, civil -- just think about it. As a matter of course, shouldn't we know what's in their actual tax returns rather than financial disclosure agreements?

Levin noted that Chief Justice John Roberts "is a man of some wealth."

So can we see his tax returns? I just wish the Republicans would get smart about how they address these issues. Go ahead and subpoena the tax returns of every Supreme Court justice and say we have a legislative purpose.

So they ought to subpoena the tax returns of the Supreme Court justices. Particularly these seven politicians on the court. Go back eight years, just like the D.A. in Manhattan.

What else should they do? Well, the Speaker of the House ought to release her tax returns...We want to see Nancy Pelosi's tax returns, just to make sure everything's kosher.

In the final opinion of this term, the Supreme Court ruled 7-2 to send the Trump tax return case back to a lower court for further arguments.

The opinion stated that "Congressional subpoenas for information from the President" -- in this case, Trump's tax returns -- "implicate special concerns regarding the separation of powers."

The justices said lower courts "did not take adequate account of those concerns." The ruling vacated lower court opinions upholding the congressional subpoenas and sent the case back for further proceedings.

The justices also set out four points for the lower court to consider, including whether the subpoena "advances a valid legislative purpose" and whether it imposes an undue burden on the president.

Levin said the Supreme Court should have done "nothing."

"It should  have overruled the lower court and said, hey look -- let the political branches duke it out. Let them duke it out. We're not going to get involved in this.
But they did."