Mark Levin: 'The Problem With the Republican Party Is...' 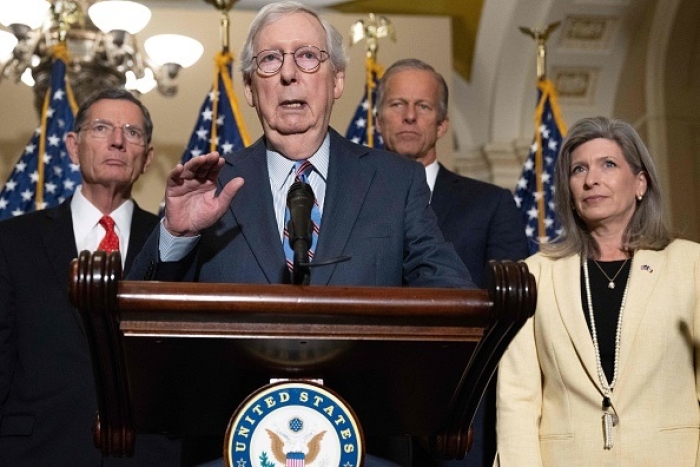 Senate Minority Leader Mitch McConnell, flanked by his fellow Republican leadership team, holds one of his weekly news conferences at the Capitol. (Photo by SAUL LOEB/AFP via Getty Images)

(CNSNews.com) - In a rebuke of the "Republican establishment," conservative talk show host Mark Levin said those Republicans should stop blaming others for their election losses and look in the mirror instead.

"The problem with the Republican Party is, it's not a conservative party," Levin said during an appearance on "Hannity." "It's not a Reagan party. It's not a Trump party. It is a Washington-centric party. It is a bureaucratic party.

"What have the Republicans done so far?" Levin asked. He noted that Democrats have successfully used the Senate filibuster rule to "gum up the works," but Senate Minority Leader Mitch McConnell wants to meet Democrats "on the 40-yard line."

"What do you mean, meet them on the 40-yard line?" Levin asked, as he questioned what Republican leaders actually stand for: "What is their agenda? Why do they want people to vote for them? Why don't they embrace conservative principles?"

'The Republican ruling class has failed us'

Here is the bulk of Levin's message to the Republican establishment, as he expressed it last night:

"So what have the Republicans in the Senate done so far? Have they laid out an agenda? You know, McConnell keeps going to the microphone, he keeps talking about, anybody talks about suspending the Constitution can't run for president. Obviously he's talking about Trump.

"You come to the microphone and you burp out words with those guys standing behind you like you're in a funeral procession. That doesn't fix a damn thing. You're always looking for foils. It reminds me of Biden. Inflation's up. Gasoline prices are up. Production is down. It's somebody else's fault.

"...So what is the position of the Senate Republicans when it comes to all these issues? God knows, there's a zillion of them. From the border to inflation to gasoline. Why don't they have a coherent, consistent legislative agenda? You had very had bright people on earlier talking about why we lose these elections.

"They've destroyed our election process. The governors and the state legislatures need to get involved and fix it. That's what they did in Florida. It's simple. Fix it! You're not going to fix it, then steal their system from them. Vote early like I do, and do all the rest. That's fine.

"And what else do we need to do in this country? The reason people don't vote is they don't have a reason to vote.

"What was the Republican position on inflation, what were they going to do? I still don't know. What were they going to do to secure the border? Well, they're in the Senate now, what are they proposing? You know what they're proposing, Sean? Illegal immigration, amnesty and citizenship for illegal immigrants. The border's wide open. Illegal immigrants are coming in, and the Republican solution is citizenship. And they're not going to stop with DACA. Schumer's already told us, all illegal aliens should be citizens.

…"What is their agenda? Why do they want people to vote for them? Why don't they embrace conservative principles? Why don't they think about Reagan and the successes of Trump. Why? Because they're not conservative, and they don't believe in it, and as long as this goes on, we're going to lose elections...

"...The Republican establishment, the Republican ruling class has failed us. And they have controlled the Congress for 30 and 40 years. Are we better off as a result of it? No. We're not. That's it."