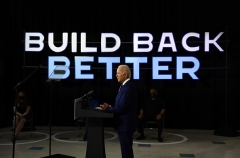 Joe Biden began talking about "Build Back Better" early in his presidential campaign. (Photo by BRENDAN SMIALOWSKI/AFP via Getty Images)

(CNSNews.com) - Sen. Joe Manchin (D-W.Va.) said on Sunday that his fellow Democrats are well aware of the "difficulties" he's had with the so-called "Build Back Better Act."

Manchin mentioned the national debt, inflation, and COVID as "serious, serious" challenges that take priority over "a mammoth piece of legislation" that would add to the debt and stoke inflation.

Manchin made it clear he objected to the cost and the budget gimmicks in BBB. Instead of prioritizing their agenda, his fellow Democrats just played shell games with the price tag:

As you recall, Bernie (Sanders) started at $6 trillion. I think he was sincere at what he thinks he needs to be done and the changes he'd like to make are social changes. Then they went to $3.5 trillion. That went down to $2.2 from the House side and even at 1.75.

The thing that never changed, Bret, was basically the same amount of things that they're trying to accomplish by just changing, if you will, the amount of time that we can depend on it. So if you're going to do something and do it, pick what are prized priorities...like most people...and you fund them for ten years and you make sure they deliver the services for ten years.

It's hard to deliver service for one year or three years or five years, and how are we going to continue them, unless it's going to put a burden, and unless we have to go back and make adjustments. But we should be upfront and pick our priorities. That's the difference.

So it hasn't shrunk in the desire. The intent is always there. And what we need to do is get our financial house in order, but be able to pay for what we do and do what we pay for.

"That's not -- and that's not being genuine, as far as I'm concerned, with my constituents in West Virginia."

The Congressional Budget Office estimated that if the programs established in the partisan Democrat legislation ran for the full ten years, the cost would be $4.5 trillion.

"We've got -- again, I'm telling you, we've got COVID at us, we haven't tackled that one and finish that. We got inflation, which we don't know when it's going to end, and that's going to take a tremendous toll. And that's what we're concerned about. That's where our efforts should be right now," Manchin said.

Manchin also said lawmakers should make sure that truly needy people are the ones benefiting from the provisions in BBB.