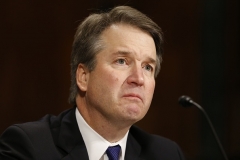 Judge Brett Kavanaugh had a rocky confirmation hearing as Democrats on the Senate Judiciary Committee tried character assassination in their attempt to defeat his nomination by President Trump. (Photo by MICHAEL REYNOLDS/POOL/AFP via Getty Images)

(CNSNews.com) - "Let's talk about how this process is going to go," MSNBC's Rachel Maddow told Sen. Amy Klobuchar (D-Minn.), who sits on the Judiciary Committee that will hold hearings on President Biden's Supreme Court nominee -- presumably a black woman, if Biden fulfills his campaign promise.

"We know how these things go by the book," Maddow said on Wednesday night, after news broke that liberal Justice Stephen Breyer is about to formally announce his retirement.

"But I also know how perverted the process has been in recent years by stuff that Mitch McConnell has been willing to do, both with open seats and to fill seats. Are you worried about there being shenanigans or dirty tricks that you haven't previously had to deal with in terms of filling this seat?" Maddow asked.

"Well, we are used to it," Klobuchar said. "They throw everything at these nominees, and we must be ready to defend them and make the case for them."

(In the past, of course, it's been Democrats who have "thrown everything" at Republican picks for the Supreme Court. The Brett Kavanaugh and Clarence Thomas vilifications come immediately to mind.)

Klobuchar told Maddow she helped to spread "the true facts" about Elena Kagan and Sonia Sotomayor when they were going through their confirmation process.

"But what we have here is a very different situation," Klobuchar continued:

It is a 50-50 Senate. But Dick Durbin controls the gavel. And I will say, under his leadership and Senator Schumer's leadership on the floor, it has been noted that we have confirmed more judges last year than any president has put forth since Ronald Reagan...So we have a lot of experience getting this done.

We have a White House that has vetted a number of nominees, well aware that this could be coming down the pike. We have so much respect for Justice Breyer and his incredible record. But they knew there was a chance he could step down. So I feel like we are in about as good a situation as we can be.

And so after the nomination is made, you know, you look at the numbers. Sotomayor was 66 days, Kagan was 87 days. Gorsuch was 65 days, Kavanaugh was 88 days and of course, Barrett, as you noted, 27 days. But who’s counting? I think everyone will be.

And so a lot of this will be – we then meet with the nominee, they try to meet with everyone on the committee as well as other senators. And we have a judicial questionnaire that some of them filled out in the last few years. So that’s helpful. That gives us a head start.

And then Senator Durbin schedules the hearing. It’s usually, as you know, a day of openings, and then from the senators and the opening statements of the nominee. And then a day or two days of questions, and then usually a panel of experts at the end.

Because we’re 50/50, you don't have that immediate vote out of committee, unless we do pick up a Republican vote. And Republicans have, in the last few decades, voted for nominees from Democratic presidents. And so we call that.

If that happens, then we get (the nomination) out. If it doesn’t, if it’s split, then we’ll use something called rule 14, that will allow Senator Durbin to get it to Senator Schumer, basically, and it goes to the floor for a vote. But yeah, when you’re 50-50, it makes for more shenanigans.

Klobuchar said the timing of Breyer's resignation -- at age 83 -- is helpful: "[N]ot waiting until the very end or the beginning of the term makes this a lot more doable," she said.