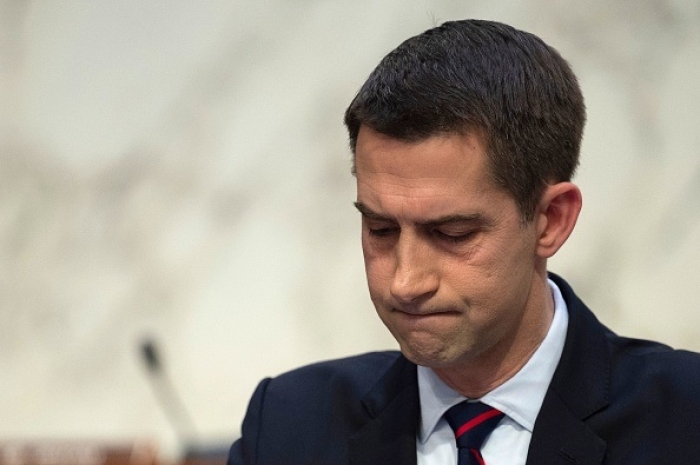 Senator Tom Cotton (R-Ark.) questions Judge Ketanji Brown Jackson during the Senate Judiciary Committee confirmation hearing on her nomination to become an Associate Justice on the US Supreme Court on March 22, 2022. (Photo by JIM WATSON/AFP via Getty Images)

"Is someone more likely or less likely to commit crime if they're certain -- more certain that they're going to be caught, convicted, and sentenced?" Cotton asked the judge.

In fact, Cotton had to ask that same "simple question" three times before finally getting a (somewhat) straight answer:

"Senator, there is research that supports that deterrence is something that can occur. Does it occur in every case? I can't say that," Jackson finally said.

Jackson not only sentenced criminals in her line of work. She also served on the U.S. Sentencing Commission from 2010-2014.

"Okay, if you don't want to address whether the United States needs more or fewer police, we'll move on to sentencing, which is certainly in your lane," Cotton told Jackson. "There's been a lot of talk about criminal justice and sentencing approaches and theory today. In general, is someone more likely or less likely to commit a crime if they know that they will be caught, convicted and sentenced?"

"Senator, what is in my lane is the consideration of particular cases of prosecutions," Jackson said.

Cotton followed up: "Just, you've spoken a lot today about criminals, sentencing, about the theory of sentencing. You've written a lot about in your record. It is a very simple question. Is someone more likely or less likely to commit crime if they're certain -- more certain that they're going to be caught, convicted, and sentenced?"

"Senator, I am aware from my work on the Sentencing Commission and not as a judge that there is research into recidivism rates, into rehabilitation, into the factors that go into a determination about whether someone is more or less likely to commit crime.

“Part of what Congress has taken into account when it determined that one of the purposes of punishment is deterrence is the idea that if someone is convicted and punished, they will be deterred from committing other crimes," Jackson said.

"You've mentioned that," Cotton told her, "and you've written about that in your writings. There's four purposes of punishment. One of those is deterrence. Isn't it inherent in the concept of deterrence that people are less likely to commit crime if they're more likely to get caught, convicted, and sentenced? Why can't you just say that's the case?"

"Senator, it's not that I'm avoiding saying that's the case," Jackson dodged.

"No, Judge, that's exactly what you're doing," Cotton interrupted. "I'm asking a very simple question. In general, is someone more likely or less likely to commit a crime if they know they're going to be caught, convicted, and sentenced? It's the heart of deterrence theory."

Jackson told the senator, "It's very -- it's very difficult to answer questions in general when you're asking about things like phenomena related to crime. It's the theory behind deterrence that by punishing someone, they will be less likely to commit the crime in the future. That is a theory that undergirds--"

Cotton interrupted again: "Do you think that theory is correct?" he asked Jackson.

"Senator, there is research that supports that deterrence is something that can occur. Does it occur in every case? I can't say that."

At this point, Cotton moved on to "something more concrete" involving the length of prison terms for murderers and rapists.

Jackson refused to "answer in the abstract" about whether murderers and rapists should serve longer or shorter sentences. But she did say six times, in response to Cotton's questions, that people should be held "accountable" for their crimes.

'We should hold people accountable for their crimes'

"Do you think we should catch and imprison more murderers or fewer murderers?" Sen. Cotton asked the judge. 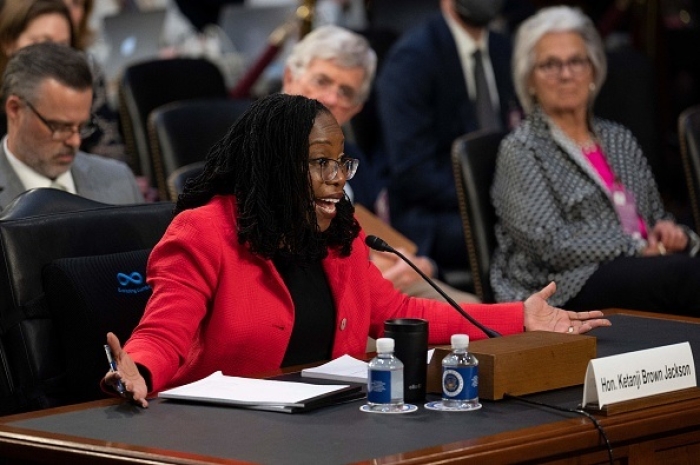 "Well, Senator, it's very important that people be held accountable for their crimes. So -- that is a fundamental tenet of the rule of law," Jackson said.

Cotton asked her the same question again, getting a similar answer: "Senator, we should hold people accountable for their crimes. And so if people are not being held accountable, then that is a problem."

Cotton then asked the judge, "Do you think we should catch and imprison more rapists and sex criminals, or fewer?"

Jackson called rape a "horrible type of crime, as are all of these that you are articulating. And it is important for people to be held accountable for criminal behavior. It's fundamental to the rule of law," she said.

"Do you think we imprison too many violent criminals or not enough?" Cotton asked the judge.

"Senator, it's important for our rule of law to ensure that people are held accountable who are breaking the law, in the ways that you mention and otherwise," Jackson responded.

"What do you think the families of all those victims think?" Cotton asked the judge. "Do you think they think that we should arrest and convict and sentence all these criminals who get away with it?"

Jackson mentioned accountability for the sixth time: "Senator, I know what the families of law enforcement officers think, because I'm one of them. I know what crime does to our society. I care deeply about public safety. And as a judge, it's been my duty when I was at the trial level -- I'm no longer there, but when I was at the trial level -- to ensure that people are held accountable for their crimes."