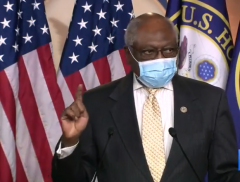 (CNSNews.com) - Democrat leaders, explaining their intent to pass "bold" legislation that lacks Republican support, argued that the Senate filibuster is used to "undermine the rights of citizens of color in America," as House Majority Leader Steny Hoyer (D-Md.) put it.

Following Hoyer to the microphone at Tuesday's news conference, House Majority Whip James Clyburn (D-S.C.) said if Republicans "use the filibuster to deny a minimum wage increase, it will be tantamount to using it to deny civil rights."

Clyburn reminded his listeners that the filibuster -- the 60-vote threshold needed to advance bills in the Senate -- was used to kill the 1957 Civil Rights Act.

All that stands in the way of the leftist Democrat wish list is the Senate filibuster. Because the Senate is divided 50-50, the Democrat agenda will not get the necessary 60 votes to pass, unless the filibuster rule is scrapped.

Hence, the effort on Tuesday to demonize the filibuster, in this case, as a tool of oppressive Republicans:

"I am one who believes that the filibuster is an undemocratic -- utilized in my early generation, when I started in an interest in public affairs, to undermine the rights of citizens of color in America," Hoyer said. "I think the filibuster ought to be modified."

The Founders wanted the Senate to be able to talk and be more thoughtful and sort of as they said, cool the hot broth into the saucer. But we can't magically make the Republicans be for what the people are for. That was my point.

The people (are) overwhelmingly for the agenda we're passing. And democracy works. And so if the people want those bills to pass, they will either demand that we do away with the filibuster or demand that some Republican senators who refuse to vote for what the people want leave office.

I remember in 1957, I was a high school graduate--I graduated high school in 1957. A lot of people think that Strom Thurmond filibustered the Civil Rights Act, they think about 1964. It was the 1957 Civil Rights Act which was nothing but a principle. And the filibuster was used to kill that. And we've seen it used throughout time.

Now I'm calling on the American people, but I'm also calling on my friends in the Senate. I think all of you that--that's watching things over the last several days -- you see that our Republican colleagues are now adhering to political philosophies that are the throwback to the 1940s and 50s. And they're using the filibuster to deny progress basically to low-income people.

And if they're gonna use the filibuster to deny a minimum wage increase, it will be tantamount to using it to deny civil rights. And that to me is what we're going to be talking about going forward. We're not going to just give in to these arcane methods of denying progress. This party is not gonna do it.

And if they want to be categorized that way we will oblige them. I can tell you I will not be quiet on this issue. People of color will not be quiet on this issue. We are not going to allow the filibuster that was used to deny me and people who look like me the opportunity to come to this Congress. And that's what they did. And they're not gonna deny the opportunity for people to make a decent living above the poverty wage.

Also speaking at the news conference, House Speaker Nancy Pelosi (D-Calif.) predicted that Democrats will use the budget reconciliation process -- a 51-vote threshold -- to pass other legislation, in addition to the $1.9 trillion stimulus bill.

The Senate parliamentarian recently ruled that a minimum wage hike may not be included in a reconciliation bill.