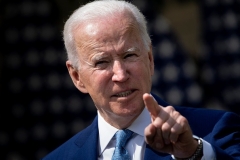 (CNSNews.com) - The Biden White House on Wednesday released a 15-page "fact sheet" on the American Families Plan, which President Biden plans to discuss in his first speech to a COVID-limited, joint session of Congress tonight.

But according to the White House fact sheet, "It is not enough to restore where we were prior to the pandemic. We need to build a stronger economy that does not leave anyone behind."

The plan unveiled today aims to "grow the middle class, expand the benefits of economic growth to all Americans, and leave the United States more competitive."

Two pages of the fact sheet explain how Biden would pay for his third blockbuster spending plan: tax the wealthy.

--"Revitalize enforcement to make the wealthy pay what they owe."

It would require financial institutions to report information on account flows so that earnings from investments and business activity are subject to reporting more like wages already are. It would increase funding for the IRS to catch wealthy tax cheats. The additional money “would focus on large corporations, businesses, and estates, and higher-income individuals. Altogether, this plan would raise $700 billion over 10 years."

--Increase the top tax rate on the wealthiest Americans to 39.6 percent (from 37 percent).

--Raise the capital gains tax for households making over $1 million. The top 0.3 percent of all households would pay the same 39.6 percent rate on all their income, equalizing the rate paid on investment returns and wages.

--Eliminate stepped-up basis that allows heirs to avoid capital gains incurred by the previous owner. (Stepped-up basis would continue for gains under $1 million.)

--Require hedge fund partners to pay ordinary income rates on their income just like every other worker.

"The result of the President’s individual tax reforms will be a tax code with fewer loopholes for the wealthy and more opportunity for low-and middle-income Americans," the fact sheet says.

"Altogether, these tax reforms focused on the highest income Americans would raise about $1.5 trillion across the decade. In combination with the American Jobs Plan, which produces long-term deficit reduction through corporate tax reform, all of the investments would be fully paid for over the next 15 years."

And what are the wealthiest among us paying for? Here's a sample of what's in Biden's American Families Plan:

-- Direct support to low- and middle-income families to ensure they spend no more than seven percent of their income on child care; create a new paid family and medical leave program for workers and families; expanded food and nutrition programs for families and students; make ex-cons convicted of drug felonies eligible for SNAP benefits.

--Strengthen and reform the unemployment insurance system, adjusting the length and amount of UI benefits unemployed workers receive depending on economic conditions. Give IRS the authority to regulate paid tax preparers.

And then there's a billion-dollar nod to former First Lady Michelle Obama:

Biden's plan would "launch a healthy foods incentive demonstration,” which is explained as follows:

To build on progress made during the Obama Administration to improve the nutrition standards of school meals, this new $1 billion demonstration will support schools that are further expanding healthy food offerings. For example, schools adopting specified measures that exceed current school meal standards will receive an enhanced reimbursement as an incentive.