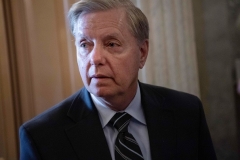 (CNSNews.com) - Lindsey Graham, chairman of the Senate Judiciary Committee, on Thursday began debate over his request for authority to issue dozens of subpoenas related to the FBI's Crossfire Hurricane investigation.

But eventually we're going to call McCabe and Comey and ask them, how could you not know that in January of 2017 your FBI and the Department of Justice interviewed the Russian subsource that provided all of the material for the dossier and said that it was a bunch of hearsay, it was not reliable, and why did you still use that material to get a warrant against Carter Page?

We're going to ask a lot of hard questions, and I'm not going to let them blame this on some lower level guy. Rosenstein said, I didn't know, I didn't know. Well, I don't believe that about McCabe and Comey. Time will tell.

Democrats on the committee argued against Graham's request for broad subpoena power, saying the oversight investigation into a "conspiracy theory" is a distraction, "irrelevant to what is happening on the streets of America today," as Sen. Kamala Harris (D-Calif.) put it.

I'm not going to be deterred by this. I'm doing nothing wrong. The FISA Court rebuked the FBI in the strongest terms I have ever known. I want you to understand, it matters to me that the FBI knowingly used fraudulent material to get a warrant against an American citizen, that they destroyed General Flynn's life.

January the 4th, they wanted to dismiss Flynn from the Crossfire Hurricane investigation, the field agents did, but the seventh floor continued it. They destroyed this man's life, and they are going to pay a price.

Although Democrats have "zero interest," Graham said he has a "lot of interest," and "we're going to get to the bottom of this."

Now we've found that the Mueller probe was full of corruption and criminal wrongdoing. They have zero interest in trying to find out why warrants were issued against Carter Page using fraudulent material.

They have zero interest in trying to find out why the Russian dossier was still used by the FBI when the Russian subsource said it was a bunch of garbage.

They seem to have zero interest in wanting to find out why DOJ lawyer doctored an e-mail, and why General Flynn got persecuted not prosecuted.

I've got a lot of interest, and I took offense to that. I tried to be fair to make sure that Mueller would have his day, but we're going to get to the bottom of this. And next Thursday we're going to vote on this subpoena, and it will pass.

And I'm going to use it in a way to get to the truth, and I'm not going to let the system blame lower-level FBI agents for what I think was abuse at the top level.

You'll never convince me, Martha,that McCabe and Comey did not know that the Russian dossier was disavowed by the Russian subsource. It became a piece of garbage. I can't imagine the most high profile investigation in the last 30 years at the FBI, nobody told the senior leadership, oh, by the way our case fell apart.

Graham said he expects the committee to give him subpoena power when the vote happens next week on Thursday.