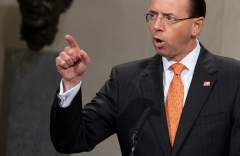 On Wednesday, the Justice Department released to Sen. Lindsey Graham a declassified version of that memo, drawing gasps from Graham, the Senate Judiciary Committee chairman:

"The memo to Mueller from Rosenstein was given to me today -- or yesterday, by (Attorney General William) Barr, fully unredacted, virtually unredacted.

"So now we know that the scope of the investigation was to look at Carter Page, Flynn, Papdopoulos and Manafort as to whether or not they were working with the Russians. Now this is in August of 2017."

But Graham noted that in January 2017 -- eight months earlier -- the Steele dossier had been "disavowed" by a Russian "sub-source," and the FBI knew it.

"And without the dossier, there's no warrant" to spy on Carter Page eight months later, Graham said. "So they knew that the Carter Page thing was a fraud."

-- Former foreign policy adviser to the Trump campaign George Papadopoulos, for colluding with Russian government officials and acting as an unregistered agent of Israel.

-- Former Trump National Security Adviser Michael Flynn, for "engaging in conversations with Russian government officials during the period of the Trump transition; making false statements to the FBI when interviewed about his contacts with the Russian government; failing to report foreign contacts and income on a form SF-86 that he completed in anticipation of his being selected to serve as the National Security Adviser to President Trump; acting with respect to Russian interference in the 2106 election; and two alleged financial dealings.

But by August, "there was no legal justification to suspect Carter Page of being a Russian agent because it all depended on the dossier. And that crumbled in January.

Flynn's case was looked out by the field office in Washington, January the 4th of 2017. They said there's no reason to believe he is doing anything wrong. He shouldn't be part of Crossfire Hurricane.

"I wish a Democrat would take this seriously," Graham said. "But I supported the Mueller investigation because I didn't know. Now I know. Now I know why Mueller didn't find anything...because there was nothing there to find."

Graham made a second point:

Here's what the court is told by the FBI and the Department of Justice in July of 2018.

They say in the letter to the court, no, the application is good. It's solid, it's sound. A few technical irregularities. Then they repeat the lie that the sub source was truthful and cooperative. In other words, they're telling the court that the sub source validated the dossier rather than shredded it.

They are actually repeating that lie again in 2018. Only until Horowitz came along did we know. Why couldn't they have found what Horowitz found in the file, you have a memo, right there for everybody to see indicating that the sub source, the Russian sub source, said the dossier was a bunch of garbage? It was hearsay, bar talk...I'm telling you, man, this is J. Edgar Hoover stuff. We're going to have hearings.

In July of 2018, how could you possibly tell the court that the sub-source was truthful and cooperative when the memo in the file says he undercut the dossier? They are repeating the lie to the court that Horowitz found. That's tells me the FBI's has not taken seriously the abuses associated with Crossfire Hurricane as late as late as July of 2018. That's what it tells me, beyond any doubt.

In a statement to reporter Jon Solomon on Wednesday, Rep. Devin Nunes, the ranking member of the House intelligence committee, said:

"This information was redacted until now, for one single reason -- to hide the fact that the false allegations from the Steele dossier were included in Mueller's scoping memo."

"In other words, a bunch of lies paid for by the Democrats were used to engineer the appointment of a Special Counsel to drag the Trump administration through the mud for years. The Russia collusion hoax was a disgrace, and we can’t let anything like it ever be repeated.”