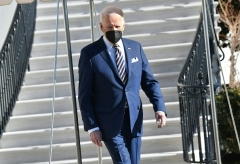 (CNSNews.com) - In a divisive speech in Georgia on Tuesday, President Biden demonized Republican senators who don't agree with the partisan Democrat attempt to set federal rules for state-run elections.

Biden suggested that without federal election legislation, the United States will slide into autocracy. And he said anyone who disagrees with the Democrat attempt to federalize voting laws stands for "voter suppression" and "subversion"; stands against democracy; and is on the side of racists and segregationists, whom Biden named: George Wallace, Bull Connor, and Jefferson Davis.

They have called every Republican in the country a racist. They call me a racist. They called Tim Scott a racist, Herschel Walker -- anybody who supports voter integrity laws in Georgia, which are better for voters than in Delaware -- but I want to put this into context.

I went to Strom Thurmond's funeral. He was the longest serving senator in South Carolina, and Joe Biden came and spoke for about an hour about his friend Strom Thurmond. He said, I didn't agree with his policies but he was a good, decent man I could work with.

Joe Biden, that Joe Biden is dead and buried. What you saw was a guy running scared. He's afraid of the left. They are going to throw him off the ticket.

And he's been a failure as a president so he's playing the race card. And I don't appreciate it. You know, I've got plenty of faults. I'm not by any means a perfect person. But I am not a racist. You're not a racist if you want to have the law so you identify people, that they are who they (say they) are when they vote by mail.

"It's called Biden-itis," Graham said.  “It's a political reaction, allergic reaction to being on stage with Joe Biden. It will spread throughout the country," Graham predicted.

Graham is a staunch supporter of President Donald Trump, whom he described as "the most consequential Republican since Ronald Reagan."

Graham said he thinks Trump will be re-elected in 2024. And he said any future Republican leader in the House or the Senate will have to have "a working relationship with president Donald Trump."

That would rule out current Senate Republican leader Mitch McConnell, with whom Trump has been feuding for months.