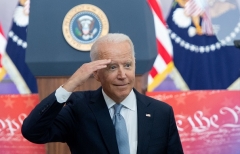 "But of course, that's not what this is about," former House Speaker and historian Newt Gingrich told Fox News's Sean Hannity Tuesday night. "This isn't about facts. This is about a narrative," Gingrich said.

"But I'm going to shock you. I agree with the president. This is the greatest threat to the survival of freedom since the Civil War."

Speaking in Philadelphia on Tuesday, Biden slammed the "assault on free and fair elections."

Gingrich agreed on the extent of the threat, but it has to do with the entire Democrat agenda, he said:

"I believe this is the greatest threat, domestic threat -- not counting the Soviet Union or Nazi Germany -- the greatest domestic threat the United States has faced to freedom since the Civil War, and the threat is entirely in the Democratic Party. And it is a mortal threat, and if they get their way, if they can pass the corrupt politicians act [the voting bill], you will see them steal everything they need to steal."

Gingrich said the Bidens, Harrises, Schumers, and Pelosis are "corrupting the military. They're corrupting the entire system and they will do whatever they have to, to try to dominate us and to dominate all of the American people and impose their radical values. This is the greatest threat to the United States since the Civil War."

Gingrich singled out Vice President Kamala Harris for being "totally out of touch with reality," as evidenced by her mistaken belief that Kinkos is still in business.

Arguing against voter ID, Harris said last week that it would be an insurmountable obstacle for "a whole lot of people, especially people who live in rural communities" where "there's no Kinkos, there's no OfficeMax near them" where they can photocopy their driver's licenses to apply for absentee ballots.

"A lot of people worry about President Biden and his cognitive abilities -- we want to watch her for a week," Gingrich said. "She literally cited Kinko's. Kinko's has not been in existence for 13 years.

"And I know that's a tricky thing if you're from California, but still, I think it tells you much -- a lot about who they are. They don't know anything. They're not in touch with reality. They make it up as they go along."