Ex-OMB Director Mulvaney on Dems' $3.5T Bill: 'If Anything Passes, It will Be Unpaid For' 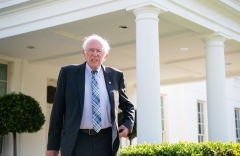 Senator Bernie Sanders (I-Vt.), the Budget Committee Chair, leaves the West Wing of the White House on July 12, 2021, after attending a meeting with President Biden. (Photo by SAUL LOEB/AFP via Getty Images)

Democrats hope to pass the bill using the reconciliation process, which requires 51 votes. All Republicans oppose the bill, saying child care, home health care, Medicare expansion, free education and the rest of it don't fall under the definition of traditional infrastructure.

Former U.S. Rep. Mick Mulvaney, who headed the White House Office of Management and Budget under President Trump, said there's no way Democrats can pay for this without raising taxes on the middle class.

There's just not enough rich people in the country that they can raise taxes on, there's not enough corporations. The corporate tax is a small fraction of what the government takes in every single year. You could raise it dramatically and it wouldn't raise that much more money.

So what you're going to see -- I guess, I think, it's an educated guess -- over the next couple of weeks is a lot of smoke and mirrors. One of my favorites is, they're going to close the tax gap, they're going to spend more money at the IRS, and the IRS is magically going to take in money. This is something that we were not willing to assume in our first Trump budget way back in 2018 because it would have been attacked as a gimmick.

Schumer noted that the Democrats $3.5 trillion bill -- when combined with the part one "compromise" bill -- will total $4.1 trillion:

"Every major program that President Biden has asked us for is funded in a robust way," Schumer said about part two, the $3.5 trillion plan. "And in addition, we are making some additions to that. Most important, something that Sen. Sanders has led, and convinced America is so important, which is a robust expansion of Medicare…including money for dental, vision and hearing."

Schumer said Democrats are "very proud of this plan," and he admitted, "We're going to get this done for the sake of making average Americans' lives a whole lot better."

But are all Senate Democrats on board with such massive spending?

"I think Joe Manchin has sort of become this poster child for Democrats who still care about fiscal responsibility. He can do that. He can take on chuck Schumer because of where he's from. Remember, Donald Trump won West Virginia by high two digits in the last couple of election cycles. So it doesn't hurt Manchin to go up against Schumer politically.

Mulvaney said "politics...not economics" is the only way to view the Democrats' attempt to force their social agenda through an evenly divided Senate:

I think Washington makes a lot more sense recently if you simply take economics and throw it in the trash and look at it through the lens of politics. Give the Democrats credit, Maria. They're much better at using their majorities than the Republicans are. They were willing to give up their majority in 2010 of in order to pass Obamacare. They got it done. They changed the culture, the landscape of the nation.

They're trying to do that again. They are willing to give up their majorities in the House and the Senate. They don't want to but they're willing to do it in order to do things like expand Medicare or give free college education.

These are the things they stand for, and they are willing to give up political power temporarily in order to make the country look more like they want it to be.

And I think that's what you're seeing. And it's not economics, it's pure politics. You have to give credit. Elections have consequences, and no one knows it better than the Democrats.