DOJ Stonewalling Biden Probe? Could Be 'One of the Biggest Cover-ups in American History,' Rep. Comer Says 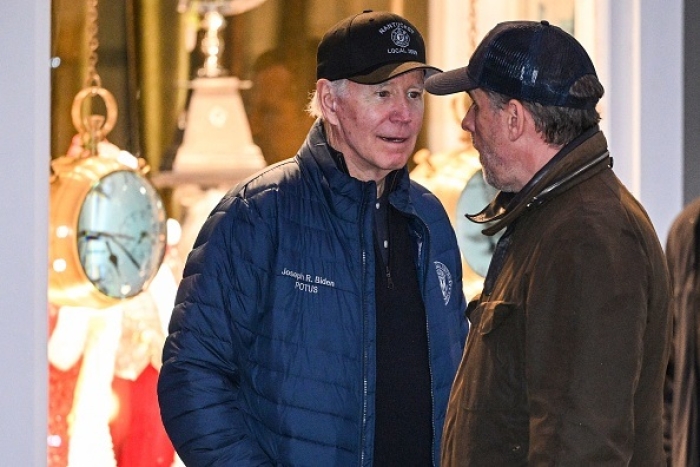 President Joe Biden talks to his son Hunter Biden while shopping in Nantucket, Massachusetts, on November 25, 2022. (Photo by MANDEL NGAN/AFP via Getty Images)

(CNSNews.com) - Colorado-based attorney Kevin Evans says the U.S. Justice Department is stonewalling his FOIA request for documents relating to gifts, payments and communications that Hunter Biden and Jim Biden -- the president's son and brother -- had with or received from Russia, China and Ukraine.

Evans said eventually he received a letter saying that DOJ had some documents that might be responsive -- in other words, that might fall under his FOIA request.

"They had to run it up the flagpole, so to speak, to undefined offices for an analysis," Evans told Sean Hannity.

Then in May 2022, at a court hearing, Evans said a DOJ lawyer repeated that "the DOJ has 400 pages of potentially responsive documents to review and determine what to do with." But in July, the DOJ refused to admit or deny that the documents exist -- after having said they existed.

Sounds like one big cover-up, said Rep. Jim Comer (R-Ky.), the incoming chair of the House Oversight and Reform Committee.

"Well, this is about Joe Biden because these are government e-mails that would show proof that Joe Biden knew about gifts that his son and his brother were receiving from our adversaries," Comer told Hannity Tuesday night.

"That's why we're investigating the Biden family influence-pedaling, and this is the family business. A lot's talked about with regards to Hunter Biden, but Joe Biden's brother Jim was just as involved as Hunter. He was just not dumb enough to leave his laptop laying around.

"And the fact that the government continues to cover this up -- I could make an argument that this has the potential to be one of the biggest cover ups in American history.

"When you look at previous cover-ups, whether it be Watergate, Iran-Contra or even many of the Clinton scandals -- the media was there, hounding the administration all the time with FOIA requests and with requests from committees like the Oversight Committee.

"But what we have here with the Biden cover-up is the mainstream media turns a blind eye. So I strongly support what Mr. Evans is doing with his FOIA request. And I think that will be evidence that we could use to determine whether or not Joe Biden is compromised.

"We know he lied about his family's business schemes, but what we need to know is if this administration is in fact compromised because of all the shady business dealings."

Comer said his committee hopes that the courts, at some point, will force the DOJ to comply with Evans' FOIA requests. Comer also hopes banks "will work with us to turn over the information to prove once and for all that Joe Biden was a central part of the Biden family influence-pedaling."

Hunter Biden complained in emails that "half" of his salary went to paying his father's bills while Joe was vice president.