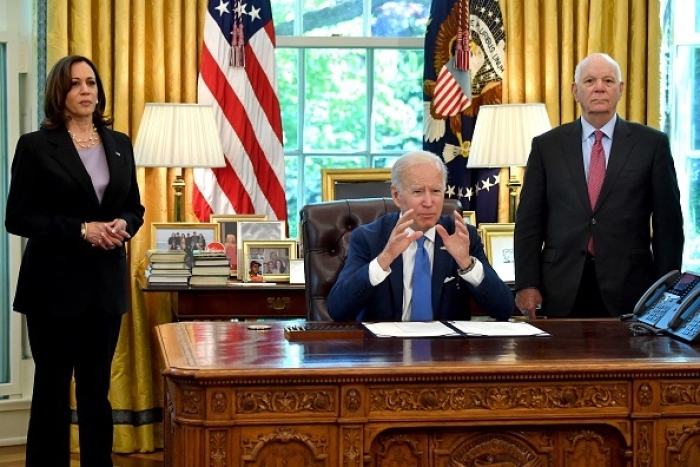 (CNSNews.com) - Even some Democrats who voted for the so-called Inflation Reduction Act on Sunday aren't thrilled with everything that's in it -- nor are they happy about the reconciliation process that allowed it to pass.

Budget reconciliation bills require only a simple majority to pass, and when the Senate's 50 Democrats can't get Republican support, as in this case, they turn to reconciliation for bills involving budgetary items.

Sen. Ben Cardin (D-Md.) voted for the tax-and-spend bill that passed on Sunday, with Vice President Kamala Harris adding the 51st vote. But he knows this isn't the way to do it:

"Doing all these bills by reconciliation is not the right way to do it. The Republicans did it in 2017 on the tax bill. We are obligated to use this process because we can't get Republicans to work with us on fundamental issues such as -- such as energy, climate and health care costs.

"But it would be much better if we could have a process where we work together and have the richness of every member participating in the process, bipartisan process.

"We have a good record of working together. Let's work together for the American people and let's not threaten that we're going to shut down government or do things that are -- that are wrong. Let's figure out ways that we can work together."

Although he admitted that reconciliation is not the "right way" to pass bills, Cardin gave whole-hearted endorsement to the Democrat bill, "which is the largest investment ever in climate, that deals with the affordability of health care and deals with an energy policy that makes sense for this country.

"And we did it paying for it through the corporations that have escaped taxation through better collection of taxes on high income people, and we reduced the deficit at the same time. That's quite an accomplishment.

In a statement following the bill's passage, Senate Republican Leader Mitch McConnell disagreed that this is a "great" bill:

"Democrats' response to the recession they caused is giant job-killing tax hikes and doubling the IRS. Democrats’ response to the energy crisis they’ve exacerbated is a war on American fossil fuel to fund Green New Deal giveaways for their rich friends.

“And their response to the runaway inflation they’ve created is a bill that experts say will not meaningfully cut inflation at all.

“The American people are clear about their priorities. Environmental regulation is a 3% issue. Americans want solutions for inflation, crime, and the border.

“And Republicans spent all night and all day putting forward solutions to tackle those issues. But not one Senate Democrat would agree to take one dime out of their Green New Deal nonsense to cut inflation, fight crime, or secure the border.

“Democrats have proven over and over they simply do not care about middle-class families’ priorities. They have spent 18 months proving that. They just spent hundreds of billions of dollars to prove it again."

Sen. Bernie Sanders (I-Vt.), one of the most liberal senators, also criticized the bill, but only because it doesn't spend and tax enough:

"In my view, this legislation goes nowhere near far enough for working families, but it does begin to address the existential crisis of climate change. It’s an important step forward and I was happy to support it."