Cruz: Latest Mask Guidance Is 'Pure Politics'; Mandates for Americans, But Not for Illegal Aliens? 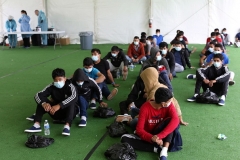 Young migrants wait to be tested for COVID-19 at the main detention center for unaccompanied children in the Rio Grande Valley in Donna, Texas on March 30, 2021. (Photo by DARIO LOPEZ-MILLS/POOL/AFP via Getty Images)

(CNSNews.com) - Telling vaccinated people they should resume mask-wearing, as the CDC did this week, is both unnecessary and "absurd," Sen. Ted Cruz (R-Texas) told Fox News's Sean Hannity Wednesday night.

Cruz also called out the hypocrisy of Democrats who put COVID-related mandates on Americans while allowing hundreds of thousands of foreigners from Third World countries, untested for disease, cross into the United States.

"Democrats have, from the beginning of this pandemic, treated it as a matter of politics," Cruz said:

From the shutdowns we saw all over the country, to the schools that were closed, and the kids that were hurt, to the jackbooted thugs that went persecuting people of faith, who were going to church and singing in church, we saw a political agenda instead of common sense to keep us safe.

And I got to say that culminated yesterday in the CDC's absurd decision that people who have been vaccinated must nonetheless where masks when inside. And that decision, Sean, that's not science. That's politics. It's pure politics.

You know what? Yesterday, vaccines worked. Today, they still work, but as a political matter, the Democrats decided they want to control your lives. They want everyone to wear a mask.

Now, look, personally, I've gotten the vaccine. My family's gotten the vaccine. That's the choice we've made. But I also believe in individual freedom and responsibility. It's your choice to decide what's right for you, what's right for your family and you don't need a bunch of meddling bureaucrats from Washington setting a mandate and deciding you have to do this, to go to work, to go to school, to get on a plane to live.

And this Democratic Party, you know, the CDC has destroyed their credibility. A year and a half ago, the CDC was one of the most respected scientific organizations in the world, and they allowed themselves to be politicized with Dr. Fauci at the helm of the politicization. And right now, their credibility is in tatters because they behave more like an arm of the DNC than an actual, serious, medical and scientific organization.

'The election of Joe Biden...was a COVID super-spreader event'

And I got to say I've spent a lot of time at the border, I've spent a lot of time with Border Patrol agents down in the Rio Grande Valley, and we are seeing -- last month, we saw 180,000 people cross the border illegally. They are being crammed into the Biden cages. You notice much of the corrupt corporate media won't show the Biden cages. They're helping Joe Biden cover it up.

Cruz said he’s seen the “Biden cages,” and so have the 19 senators who accompanied him on a recent trip to the Rio Grande Valley:

“When we were there, they had a rate of COVID positivity of over 10 percent. And like a churning, revolving door, Joe Biden is releasing them. There was just a report this week that the Biden administration has released over 50,000 illegal aliens without even giving them a court date, just release them.”

Cruz said few of those released with a notice to appear actually do show up in immigration court. Meanwhile, “It's spreading COVID in our communities.”

“And I'll tell you right now, the election of Joe Biden, Joe Biden becoming president of this country, was a COVID super-spreader event because they're releasing illegal aliens in south Texas and all across the country with COVID and they're spreading COVID.

“And yet their radical policies, they don't want to do anything to protect us,” Cruz said.