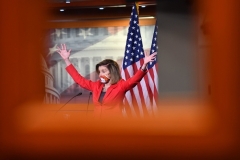 Speaker of the House Nancy Pelosi (D-Calif.) says the Democrats' .9 trillion COVID relief bill will pass the House without Republican support, if it comes to that.(Photo by NICHOLAS KAMM/AFP via Getty Images)

(CNSNews.com) - Appearing separately on "Fox & Friends" Monday morning, Sen. Tom Cotton (R-Ark.) and Rep. Steve Scalise (R-La.) both said Democrats are using the coronavirus pandemic to get money for their pet projects, including one in House Speaker Nancy Pelosi's home district, that have nothing to do with COVID relief.

"I think we know why Democrats decided to make this a partisan bill," Sen. Tom Cotton told "Fox and Friends" on Monday morning:

(They) didn't want to cooperate with Republicans, even though we worked on a bipartisan basis last year, to pass 5 bills, that spent almost $4 trillion to help our country get through this pandemic. It's because they want to use the coronavirus pandemic as an excuse to fulfill a lot of longstanding liberal priorities.

If you recall, Nancy Pelosi did this last March. She put the brakes on a bill that ultimately passed unanimously, but we had to spin our wheels for a couple days because Nancy Pelosi wanted money for some of the exact kind of things you just mentioned.

I mean, what does mass transit in San Francisco have to do with a global pandemic? It has nothing to do with it. It only has to do with Nancy Pelosi getting an earmark for her district, which this bill does across the country, bringing back earmarks of the kinds that Republicans have banned for a decade so we don't have more bridges to nowhere.

"Less than 10 percent of the money in this massive $1.9 trillion bill is for health-related items," House Minority Whip Steve Scalise told "Fox & Friends" on Monday:

I thought this was supposed to be about recovering from COVID. Start with the biggest item. $350 billion to bail out failed states. Look, California just announced a surplus of $10 billion and they're going to get probably tens more billion from this bill.

New York State, we had an amendment to require New York to report the nursing home death data that Governor Cuomo's been covering up, a major scandal in New York. Do you know that every Democrat, including the Democrats from New York, voted against requiring that Cuomo has to disclose nursing home death data to get tens of billions of dollars for New York? This is in the bill.

The president's press secretary yesterday -- Jen Psaki, on a news show, admitted that the money doesn't even have to be used to reopen schools. Over $100 billion to go to schools, not to reopen.

In fact, 95 percent of that money can't even be spent until 2022. Do you really want to wait until 2022 to start having your kid go back in school? This bill will actually delay school reopening. This is crazy.

Appearing on ABC's "This Week," Jen Psaki said it is the administration’s "goal," "objective," and "plan" to get most kindergarten through 8th graders back in school five days a week by April.

"But what we need and what the president said at the time we need is funding," Psaki said. "That's why he's proposed $130 billion in the American Rescue Plan because many schools across the country don't have the resources to be able to invest in improving facilities, on hiring more bus drivers, on hiring more temporary teachers so we can have smaller class sizes.

"There have been some important steps in the last week, including the CDC guidelines that give clear science-based guidelines for school districts on a range of steps they can take to be safe. But every school in the country does not have that funding and does not have the resources, and we need to, from our -- from the federal government help address that."

Host Jon Karl asked Psaki if President Biden will require schools that receive money to bring students back to class.

She said no: “That’s not a contingency that we’re putting in…the bill,” she said.

“I think what he (Biden) believes is that school districts working with our secretary of education, who we certainly hope will be confirmed this week, need to make a determination about what works best for them based on these CDC guidelines.”