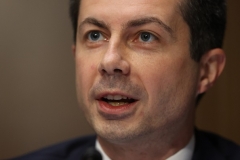 Buttigieg is just getting back to work after two months of unannounced paternity leave, a time when supply chain bottlenecks worsened at the nation’s ports.

Buttigieg told NBC's "Meet the Press" that all working Americans should enjoy the same advantage he has as a federal employee:

And we'll see what the legislative process is going to bring. But the president's been very clear on what he's calling for. And the American people want this too.

And frankly, I view this as something, or I wish, at least, that this was something the Republicans could join Democrats in calling for. Look, paid family leave is important. It's important as a matter of family values. It's important to our economy.

And one more thing that I think is maybe underappreciated. When somebody welcomes a new child into their family and goes on leave to take care of that child, that's not a vacation. It's work. It's joyful, wonderful, fulfilling work, but it is work. And it's time that our nation join pretty much every other country in the world and recognize that.

Paid family leave is part of the Democrats' $3.5 trillion "human" infrastructure plan. Taxpayers would pick up the tab for the new entitlement program.

Appearing on CNN's "State of the Union" Sunday, Buttigieg said the United States is "pretty much the only country left that doesn't have some kind of national policy for paid leave. I think it's down to us and Papua New Guinea. It is long past time to make it possible for every American mother and father to take care of their children when a new child arrives in the family."

Buttigieg's newborn twins have two fathers -- no mother in sight.

Host Jake Tapper told Buttigieg, "We're thrilled for your family. And we're happy that parental leave is a reality for so many in the U.S. Looking back, as a Cabinet secretary, why didn't you or the Department of Transportation make an official announcement when you went on parental leave? And why did you not appoint an acting secretary while you were away?"

"Well, so, the way this works is, there is a deputy secretary, Polly Trottenberg, who's doing phenomenal work and who, as deputy secretaries do, can fill in when a secretary is not available," Buttigieg responded:

And I did, even if that meant taking a phone call or making a decision from a hospital room. But I am so thankful for the phenomenal work that my colleagues at the Department of Transportation have done and are doing. And I'm thankful to be part of an administration that is walking the walk on our family values.