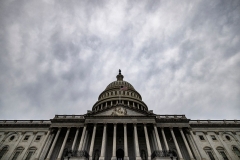 The US Capitol building is seen below an overcast sky. (Photo by SAMUEL CORUM/AFP via Getty Images)

(CNSNews.com) - Negotiations on an infrastructure package are making progress, but "the negotiations can't go on forever," Transportation Secretary Pete Buttigieg told CNN's "State of the Union" with Jake Tapper on Sunday.

"I think we are getting pretty close to a fish-or-cut-bait moment," Buttigieg said. He mentioned next Monday as a deadline for arriving at "a clear direction."

"But I will tell you that, on the fishing side of things, the negotiations have been healthy," Buttigieg said.

"There's a lot of conversations going on among members of Congress who have come forward with a lot of different ideas, in addition to the discussions that we have had with the group led by (Republican West Virginia) Senator (Shelley Moore) Capito.

"So, we believe in this process, but also very much agree that this can't go on forever. The American people want results."

"And I think the American people elected us to solve the problem of COVID, to rebuild the economy, rebuild the infrastructure. And I think it's our moment to act. ']

"I think we need a bold solution that does both the hard infrastructure of roads, bridges, high-speed rail, rural Internet, but also the softer infrastructure, the human infrastructure of paid family leave, affordable day care, making sure our kids are back to school, so that all parents can get back to work."

Asked if she thinks Republicans are negotiating in bad faith, Gillibrand said the delay in striking a deal "means we're about to miss the moment...to answer the need of this country."

"We are in an important -- an important time, where people need government to work for them. And so we have to answer that moment with bold reforms. And I think waiting any longer for Republicans to do the right thing is a misstep. I would go forward," Gillibrand said.

"President Biden has a huge, bold agenda of so much he wants to do for the economy and the American people. Democrats should respond and vote together now through reconciliation to get it done, and then move on to the rest of the bipartisan agenda..."

'We need a clear direction' by next Monday

Tapper noted that President Biden proposed spending $2.3 billion in part one of his infrastructure plan, but he has now come down to $1.7 trillion. Republicans reportedly have come up from $600 billion to around $1 trillion over eight years.

"So what's next?" Tapper asked Buttigieg:

Yes, so, this week, Congress is out of Washington, but it's very much going to be a work week for us and for the conversations that are ongoing with Congress.

By the time that they return, which is June 7, just a week from tomorrow, we need a clear direction. Certainly encouraging to see the healthy conversations that have happened over the last days and weeks, but the president keeps saying inaction is not an option. And time is not unlimited here.

We -- the American people expect us to do something. They expect us to deliver. And it's my hope that these continued conversations really over these next few days will be productive and will lead to that clear direction.

Buttigieg called it "encouraging" to hear Republicans "talking about getting to the neighborhood of a trillion."

Of course, when you start trying to make it apples to apples, comparing what would have been spent anyway, looking at the categories, that's where the devil really is in the details. And those are the things that we're continuing to discuss with them.

But I will say we have been in these discussions in good faith, and there have been really healthy negotiations of the kind that I think people were starting to wonder whether that's even possible in Washington anymore. This is exactly what happens in those negotiations. Do the categories line up? Do the numbers line up? Are we talking about the same thing? And can we get to an overlap?

We're not there yet...The fact that they philosophically seem to agree that trillion-dollar investments are the kind of thing we need to be doing right now, that's encouraging. But we aren't exactly aligned.

In fact, there's a lot of daylight here, especially because things that we consider very important, from making sure that we're sparking an electric vehicle revolution, and that it happens in the U.S. with American workers on American soil, to the president's commitment to make sure that we get rid of 100 percent of lead pipes in this country -- and we didn't see as much of that in the counter-proposal.

But, again, that's how negotiation works. These are exactly the kinds of things we're talking through over the next few days.

I just want to emphasize, we really are talking about the next few days, because, by the time Congress is back in Washington, I think those members of Congress and, frankly, the American people and all of us in the administration expect to have a clear direction.