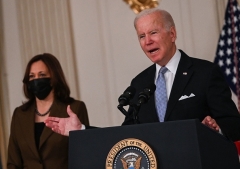 President Joe Biden touts passage of the bipartisan infrastructure bill and the rule that will allow passage of the Build Back Better Act on November 6, 2021. (Photo by ROBERTO SCHMIDT/AFP via Getty Images)

(CNSNews.com) - In a video conference with grassroots activists, hosted by the Democrat National Committee on Tuesday, President Joe Biden discussed the many ways his big government agenda will benefit Americans.

After making promise after promise (see below), Biden called for "civility" and "consensus" in politics.

"Well, I'm hoping...that we can get back to a place where there's more civility in politics," Biden said at the conclusion of the video chat.

I really mean it. And I've never seen it this way. You know, the Republicans who voted in the House of Representatives for the infrastructure bill, you've seen in the press, the reports that the other Republicans are trying to strip them of their standing in the Congress.

If they're a chairman of a committee, they're trying to strip them of that chairmanship. I've never seen it like this before. It's got to stop for the sake of America. I know I get in trouble when I talk about bipartisan. These people say, why the devil would I like any Republicans? Well, it's important. We are -- unless we generate consensus in America, we're in trouble.

And when the one thing we generate a consensus on, and then the very people who voted for it initially, because it looked like the Democrats were going to be given credit for something, are now being threatened with their chairmanships -- it's just not right. We're going to change it, though.

Biden did not say how he would change intra-party squabbles.

Thirteen House Republicans voted with most Democrats to pass part one of Biden's infrastructure package last week. But all Republicans oppose part two of Biden's plan, so there is no consensus there. Nevertheless, Biden and his fellow Democrats are pushing hard for passage of the entire Democrat wish-list.

Press reports say that some House Republicans want to strip committee assignments from the 13 Republicans who allowed Biden's first infrastructure bill to pass, thus paving the way for possible passage of the much larger part two, dubbed "Build Back Better."

Biden is now taking credit for part one and making a strong push for the new entitlement programs and the social transformation of America contained in part two.

"Look, this legislation (part one) is going to change the lives of every American," Biden told the teleconference.

"And now, we need to do it again with my Build Back Better plan. And I'm confident we're going to get it done as we did in the past, everything else we've tried so far, and we're going to need your help. Your help, when you're talking about it, makes the difference. And for those families struggling to afford child care and elder care, our Build Back Better Plan will be life-changing."

Harrison asked Biden, "How will the bipartisan infrastructure bill help me and my family?"

Biden said the just-passed bipartisan infrastructure bill will have a "significant impact."

He made promise after promise, as follows, all in his words:

-- All those lead pipes will be gone;

-- Transform rail, roads, and bridges, public transit, modernize our ports and our airports and freight rail;

-- Make high-speed internet affordable and available for every American household;

-- Clean up the brownfields and the Superfund sites, as well as plug abandoned mine(s);

-- Build up our resilience to storms and droughts and wildfires, and hurricanes;

-- And these investments are going to help families with their commutes and school drop-off, with safer roads and better transit options;

-- This bill is going to help fix intersections like those dangerous ones you know in your town or your city;

-- And it's going to help businesses, small and large, compete, getting their goods and the goods they make to market faster, and they will offer lower prices.

Biden also touted his pending "Build Back Better" plan, which has been described as many bills in one -- an expensive, expansive bill that has no Republican support:

"And now, we need to do it again with my Build Back Better Plan," Biden said. "And I'm confident we're going to get it done, as we did in the past, everything else we've tried so far, and we're going to need your help," Biden told the grassroots activists.

Here are Biden's promises on the Build Back Better behemoth, in his words:

-- And for those families struggling to afford child care and elder care, our Build Back Better Plan will be life-changing.

-- For those two million women who can't get back to the workforce right now because of things like child care, this will get them back to work and that's going to be good for them, good for the families, and good for the economy.

-- But there's more. There's universal pre-K for every three- and four-year-old child in America. It's going to increase academic achievement in all children and giving them an even start no matter what home they come from, no matter how little they've been taught to read or they've been read to.

-- We're going to make the most significant investment ever to turn the climate crisis into a new opportunity, new jobs.

-- It's fiscally responsible and it's paid for.

-- Plus one more thing, it extends the refundable child tax credit.

-- You know, the Build Back Better plan is not going to cause inflation like people are talking about, because 17 Nobel laureates in economics have looked at my plans and said they will ease inflationary pressure. So, for those Americans who focus on the cost of living, it's even more important to pass this legislation.

Biden is already looking beyond passage of what would be the most sweeping leftist agenda ever imposed on the American people:

"There's so much more to do," he said -- "protecting the sacred right to vote, immigration, accords, building on the Affordable Care Act, protecting a woman's right to choose, and so much more.

"And my message is this: We need to remember what got us to the White House in the first place. We won in 2020 as a unified party, maybe more unified than ever. Now, as we look at 2022, we need to stay unified. We need to remember that the American people sent us here to deliver to make their lives better."