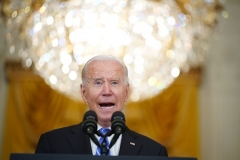 (CNSNews.com) - The U.S. government, using taxpayer money, is giving some families with children "a little bit of breathing room" by helping them pay for everything from diapers to food, even sports equipment and dance class, President Biden said on Wednesday.

"The Biden economic plan is working. And historic investments are on the way as well," Biden announced.  (In Washington, "investments" is the word for spending.)

Biden credited the American Rescue Plan "and everything else that we've done."

“But even with all this progress,” he said, “a lot of families are still feeling the pinch.”

Family budgets remain tight, and paychecks don't go as far as they need to. That has been a reality in the millions of households all across America for too long.

That's why I want to talk today about what we're going to do to try to ease the burden on families right now and what we need to do to help them succeed over the longer term.

First, for millions of families, help is on the way right now, thanks to the American Rescue Plan. On Friday, about 40 million families will receive their second monthly payment as part of our tax cut for families with children: three hundred and -- $300 for each child under the age of 6, and $250 for every child 6 through the age of 17.

That's money for diapers, food, rent, school supplies, fees and equipment for a child to join sports teams and dance class. Most of all, as my dad used to say, it just gives a parent a little bit of breathing room.

The money is a game changer. And so, I would argue, for -- for some, it's literally a lifesaver. Economists also tell us that those kinds of tax cuts boost test scores, college attendance, and lifetime earnings for children -- a win-win.

And that's why I'm glad that, early this morning, Congress took an important step to make sure that this tax cut for families with children does not expire next year. So let's keep this tax cut going and not raise taxes on middle-class families.

Senate Democrats want to make the child tax credit -- a cash infusion direct from the IRS -- permanent as part of their $3.5 trillion "human" infrastructure bill, the shell of which passed the Senate 50-49 early Wednesday morning.