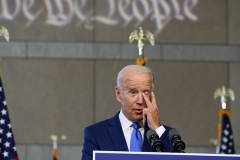 (CNSNews.com) - In a speech on Sunday warning President Trump and Senate Majority Leader Mitch McConnell (R-Ky.) not to "abuse" their power by jamming through a Supreme Court appointment, Democrat Joe Biden repeated that he would nominate an African-American woman, but "only after consulting Democrats and Republicans in the United States Senate and seeking their advice and asking for (their) consent."

Biden, explaining the high stakes of the next Supreme Court appointment, mentioned the various "crises" facing the nation:

As I said in this campaign, we're in the battle for the soul of this country. We face historic--we face historic crises. Once-in-a-generation pandemic, a devastating economic recession, the rise of white supremacy that the FBI director's warned us against, unseen since the sixties. And a reckoning on race that's long overdue. A challenging climate--a changing climate that is ravaging our nation and the world as we speak.

If we go down this path, I predict it will cause irreversible damage…

I'm not saying we have to agree on everything. But we have to reason our way through what ails us. And citizens, voters, public servants, that's the guidebook called the Constitution.

Article II, Section 2, Clause 2 of the Constitution simply says, 'he [the President] shall nominate, and by and with the Advice and Consent of the Senate, shall appoint Ambassadors, other public Ministers and Consuls, Judges of the supreme Court, and all other Officers of the United States..."

The Constitution says nothing about the timing of a Supreme Court nomination when an election looms.

According to Wray, the FBI has opened more than 1,000 domestic terrorism investigations this year and has made 120 arrests -- "everything from racially motivated violent extremists to violent anarchist extremists, militia types, sovereign citizens, you name it."

"Well, what I can tell you is that within--within the domestic terrorism bucket category as a whole, racially motivated violent extremism is, I think, the biggest bucket within that larger group. And within the racially motivated violent extremist bucket, people ascribing to some kind of white supremacist type ideology is certainly the biggest chunk of that," Wray said.

Slotkin repeated, "So they're--the white supremacists are the largest chunk of the racially motivated domestic terrorists?"

"Yes," Wray said. "But let me also say that--and I would also add to that, that racially motivated violent extremists over recent years have been responsible for the most lethal activity in the U.S. Now this year, the lethal attacks, domestic terrorism lethal attacks we've had, I think all fit in the category of anti-government, anti-authority, which covers everything from anarchist violent extremists to militia types. We don't really think in terms of left right, we just...that's not the way we look at the world."

In his speech on Sunday, Biden explained why he is refusing calls to release a list of his potential Supreme Court nominees, as President Trump has done:

First, putting a judge's name on a list like that could influence that person's decision-making as a judge, and that would be wrong. Or at least creates a perception it would have influence.

Second, anyone put on a list like that under these circumstances will be subject to unrelenting political attacks. Because any nominee I would select would not get a hearing until 2021 at the earliest. She would endure those attacks for months on end without being about to defend herself.

And thirdly and finally--perhaps most importantly--if I win, I'll make my choice for the Supreme Court not based on a partisan election campaign but on what prior presidents have done, Republican and Democrats. And I've served with many of them. Only after consulting Democrats and Republicans in the United States Senate and seeking their advice and asking for the consent--it says advise and consent, the Senate. The president is the person who gets to name someone, propose. The Senate disposes.

As everyone knows, I made it clear that my first choice for the Supreme Court will make history as the first African American woman justice. And I'll consult with senators in both parties about that pick as well as legal and civil leaders in our country.

In the end the choice will be mine, and mine alone, but I will consult. It will be the product of a process that restores our finest traditions, not the extension of one that's torn this country apart the last years.