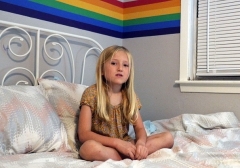 Sunny Bryant, age 8, poses at her Houston, Texas, home on March 4, 2022. Sunny is a biological male whose parents are fighting the State of Texas over female hormone treatments they want to give her when she reaches adolesence. (Photo by FRANCOIS PICARD/AFP via Getty Images)

(CNSNews.com) - "Today, the Biden-Harris Administration recognizes Transgender Day of Visibility, an annual celebration of the resilience, achievements, and joy of transgender people in the United States and around the world."

For starters, the Department of State is announcing that beginning on April 11, 2022, all U.S. citizens will be able to select an “X” (instead of 'F' or 'M') as their gender marker on their U.S. passport application.

Moreover, TSA is working closely with air carriers across the nation to promote the use and acceptance of the “X” gender marker to ensure more efficient and accurate passenger processing. The TSA PreCheck and CBP Trusted Traveler Programs will also include “X” gender markers.

While we're at the airport -- the Department of Homeland Security is implementing enhanced screening technology at passenger checkpoints. The updated body scanners, coming later this year, "will increase security and efficiency by reducing false alarm rates and pat-downs for the traveling public," the White House said. "By replacing the current, gender-based system with this more accurate technology, TSA will improve the customer experience of transgender travelers who have previously been required to undergo additional screening due to alarms in sensitive areas."

Although the first sentence of the news release talks about the "joy of transgender people," the news release later notes that transgender children "are put at higher risk of attempted suicide or mental health challenges when they face bullying, rejection, or denial of health care."

The administration also plans to expand training to support transgender and nonbinary students in schools. And it will release "new information" showing that "gender-affirming" medical care "is neither child maltreatment nor malpractice."

In fact, the administration says gender-affirming care -- supporting children who believe themselves to be a different sex or no sex at all -- is "important" to these children's "well-being."

-- Improving access to federal services and benefits for transgender Americans.

-- Accessing retirement savings. ("The Social Security Administration is announcing that it is removing the requirement that transgender people show proof of identity such as doctor’s notes in order to update their gender information in their Social Security record by the fall of 2022.")

-- Filing an employment discrimination complaint. The U.S. Equal Employment Opportunity Commission (EEOC) "will promote greater equity and inclusion for members of the transgender community by giving individuals the option to select an 'X' gender marker during the voluntary self-identification questions that are part of the intake process for filing a charge of discrimination."

-- Applying for federal student aid. The Department of Education plans to propose next month that the 2023-24 FAFSA (Free Application for Federal Student Aid) will include an opportunity for applicants to indicate their gender identity as well as their race/ethnicity when applying for federal financial aid.

-- Visiting the White House. The White House Office of Management and Administration is announcing that it will improve the White House campus entry process for transgender, gender non-conforming, and non-binary visitors by adding an 'X' gender marker option to the White House Worker and Visitor Entry System (WAVES) system. This change will ensure that transgender, non-binary, and gender nonconforming people can visit the People’s House in a manner that respects and affirms their gender identity."

-- Advancing inclusion and visibility in federal data. Agencies will expand the collection and use of sexual orientation and gender identity (SOGI) data.

-- The President’s proposed Fiscal Year '23 budget includes $10 million in funding for additional critical research on how to best add questions about sexual orientation and gender identity to the Census Bureau’s American Community Survey.

The exhaustive and exhausting news release goes on and on, explaining the many ways the Biden-Harris administration already has worked to "advance equality for transgender Americans since taking office," including:

-- Fighting for passage of the Equality Act.

-- Establishing a White House-led interagency working group to address "the crisis of anti-transgender stigma and violence."

-- Celebrating the Transgender Day of Remembrance.

-- Honoring those lost to violence with a White House vigil.

-- Establishing a National Pulse Memorial dedicated to the victims of a mass shooting at a Florida nightclub. ("As the President has said, Pulse Nightclub is hallowed ground.")

You can read the entire list of actions here.