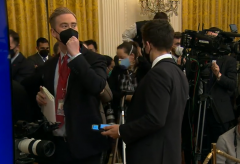 As reporters were ushered out of the room where Biden was meeting with his White House Competition Council, reporters, including Doocy, shouted questions.

"Will you take questions on inflation then?" Doocy called out. "Do you think inflation is a political liability ahead of the midterms?"

"No, it’s a great asset," Biden snarked before an open microphone. "More inflation. What a stupid son of a bitch."

After years of clips of the president and I kind of mixing it up on the campaign trail and during the transition and here at the White House, within about an hour of that exchange, he called my cell phone, and he said, 'It's nothing personal, pal.'

And we went back and forth, and we were talking about just kind of moving forward, and I made sure to tell him that I'm always going to try to ask something different than what everybody else is asking. And he said, 'you've got to.' And that's a quote from the president, so I'll keep doing it.

Hannity asked Doocy, "Did he apologize?"

"He cleared the air," Doocy responded.

"And I appreciate it. We had a nice call...He said, 'It's nothing personal, pal.' And I told him that I appreciated him reaching out.

"Hey, hey, Sean, the world is on the brink of like World War III right now with all this stuff going on. I appreciate that the president took a couple minutes out this evening while he was still at the desk, to give me a call and clear the air.

"But, but, you know what, I don't need anybody to apologize to me. He can call me whatever he wants as long as it gets him talking."

Doocy said at least the White House takes his questions at the daily press briefing. "As the president said, 'Nothing personal, pal.' So I think that's enough. That's enough," Doocy said.