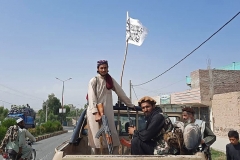 Taliban fighters drive an Afghan National Army vehicle through the streets of Laghman province on August 15, 2021. (Photo by -/AFP via Getty Images)

(CNSNews.com) - From the moment he took office on January 20, President Joe Biden began signing a flurry of executive orders to undo or reverse many of the policies instituted by President Trump.

But Biden did not scrap Trump's plan to withdraw all remaining troops from Afghanistan. And in a statement on Saturday, Biden -- who has not been seen since his departure for Camp David on Friday -- blamed Trump for the mess he "inherited."

When I came to office, I inherited a deal cut by my predecessor-- which he invited the Taliban to discuss at Camp David on the eve of 9/11 of 2019 -- that left the Taliban in the strongest position militarily since 2001 and imposed a May 1, 2021 deadline on U.S. Forces. Shortly before he left office, he also drew U.S. Forces down to a bare minimum of 2,500.

Therefore, when I became President, I faced a choice -- follow through on the deal, with a brief extension to get our Forces and our allies’ Forces out safely, or ramp up our presence and send more American troops to fight once again in another country’s civil conflict. I was the fourth President to preside over an American troop presence in Afghanistan -- two Republicans, two Democrats. I would not, and will not, pass this war onto a fifth.

If the risks weren't so serious, Chris, it would be pathetic. I wouldn't have let my 10-year old son get away (with) this kind of pathetic blame-shifting. He should be less focused on trying to blame this on someone else than to solving the problem of making sure that we protect and defend American security.

Chris, it's worth noting this did not happen on our watch. We reduced our forces significantly and the Taliban didn't advance on capitals all across Afghanistan. So it's just a plain old fact that this is happening under the Biden administration's leadership now almost a quarter of our way into his first term, this is -- this is not the way leaders lead by pointing backwards.

We had a bad deal. We inherited the JCPOA. We got out of it. We secured America from the risk of Iran. We inherited a horrible deal in Syria where ISIS controlled real estate the size of Great Britain. We crushed them. Every president confronts challenges. This president confronted a challenge in Afghanistan. He has utterly failed to protect the American people from this challenge.

In a statement on Monday, Donald Trump hit back:

"First Joe Biden surrendered to COVID and it has come roaring back. Then he surrendered to the Taliban, who has quickly overtaken Afghanistan and destroyed confidence in American power and influence. The outcome in Afghanistan, including the withdrawal, would have been totally different if the Trump Administration had been in charge. Who or what will Joe Biden surrender to next? Someone should ask him, if they can find him."

The February 29, 2020 peace agreement struck by the Trump administration and the Taliban contained four parts:

1. "Guarantees and enforcement mechanisms" to prevent Afghanistan from being used as a terrorist base from which to launch attacks on the U.S. and it allies.

2. "Guarantees, enforcement mechanisms, and announcement of a timeline for the withdrawal of all foreign forces from Afghanistan."

3. After the first two conditions were met, The Taliban would start intra-Afghan negotiations with the Afghan government, which took place in Doha, Qatar.

4. A permanent and comprehensive ceasefire would be an item on the agenda of the intra-Afghan dialogue and negotiations.

"The four parts above are interrelated and each will be implemented in accordance with its own agreed timeline and agreed terms. Agreement on the first two parts paves the way for the last two parts," the written agreement said.

"I was in the room," Pompeo said on Sunday. "I was at the center of working to deliver that (agreement)."

We negotiated a deal that performed a basis for the conditions-based withdrawal for American soldiers. I'm proud of the work that we did there. We brought a lot of young kids home. We saved a lot of American lives.

We were working diligently to deliver on the president's two missions, to get our young people home, to reduce the risk of the United States from having our soldiers, sailors, airmen, marines there in Afghanistan, and second, to create the conditions where we could make sure that a terror attack on the United States did not happen from there.

We did it in the Philippines. We did it in Syria. We reduced terrorism risk all around the world. We would have done it in Afghanistan as well.

(Pompeo described Afghan President Ashraf Ghani as a "corrupt leader" who spent more time in Washington, D.C., lobbying for money than he did building coalitions back home "and working with the Taliban himself.")

Host Chris Wallace noted that Pompeo was the first American secretary of state to meet with the Taliban, "and you talked about how they had agreed to join us in the fight against terrorism," Wallace said. "Do you regret giving the Taliban that legitimacy? Do you regret pressing the Afghan government to release 5,000 prisoners, which they did, some of whom are now back on the battlefield fighting with the Taliban?" Wallace asked.

"Chris, you make peace with your enemies," Pompeo said:

The statement that I made that day was absolutely true. You can ask the military leaders on the ground. We did good work to crush al Qaeda. When we left office, there were fewer than 200 al Qaeda left in Afghanistan.

They understood that American power was going to come to their village, to their community, to their friends and family around him and we were going to make sure that they understood America wasn't going to allow Americans to be killed from this place.

We didn't take the word of the Taliban. We watched their actions on the ground. When they did the right thing and they helped us against terror, that was all good. And when they didn't, we crushed them.

Asked what the fall of Afghanistan says to America's allies and enemies, Pompeo called it "a very important question."

I think weak American leadership always harms American security. So this is in the context of the Biden administration that has basically abandoned the global stage in favor of climate change. They've been focused on critical race theory while the embassy is at risk. That didn't happen during our four years.

I do think there's a real risk here. I think our soldiers, sailors, our junior enlisted soldiers have done amazing work along the way. But I think the senior military leadership that had 20 years to build out these coalition forces, the Afghan national security forces, has to fundamentally rethink the training that they've provided them, the weapons they provided them, how they were thinking strategically about handing this battle off to the Afghan people.

And we had a president in Afghanistan who wasn't prepared to do the right thing for his own national security, for his own country.

I think that political failure and that military failure is something that we're going to have to take a long, hard look at to make sure that we are always securing American freedom.

Pompeo said the Biden administration should have had "an orderly, conditions-based way" to draw down U.S. forces in Afghanistan.

Pompeo said the Biden administration's refusal to adopt a "deterrence model" like the one followed by the Trump administration has made the Taliban and others "aggressive" and "fearless."

We've had Iranian rockets landed in Israel. We've handed the pipeline back to the Russians, right? We've allowed the Chinese to castigate our senior leadership in Anchorage and now we're letting the Taliban to run free and wild all around Afghanistan.

They have to understand that there's in an administration with a backbone and a seriousness to execute on the things that matter and protect and defend America.

Trump: A Troop Withdrawal Under My Presidency Would Have Been ‘Conditions-Based’ (Aug. 13, 2021)

McConnell: Biden Must Explain Why He Thinks ‘Retreating in the Face of the Taliban Will Make America Safer’ (April 13, 2021)

As Taliban Takes Over, U.S. State Dep't Insists 'Diplomacy' Will Bring 'Stability and Security' to the Afghan People (Aug. 12, 2021)