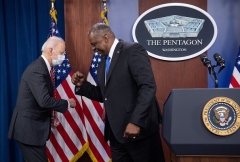 President Joe Biden elbow bumps US Secretary of Defense Lloyd Austin during a visit to the Pentagon on February 10, 2021. (Photo by SAUL LOEB/AFP via Getty Images)

(CNSNews.com) - In December, when President-elect Joe Biden nominated General Lloyd Austin to serve as his defense secretary, Biden hailed him as a "friend" and "someone with whom I have worked closely for many years."

But on Monday, President Joe Biden couldn't remember Austin's name, despite having named him only minutes earlier.

At the end of his speech, Biden thanked the two military women for their "exemplary careers and service to our country." And then he thanked "the guy who runs that outfit over there," meaning the Pentagon:

So I want to thank you both, and I want to thank the Sec--the--the former general -- I keep calling him General, but my--my--the guy who runs that outfit over there. I want to make sure we thank the Secretary for all he's done to try to implement what we've just talked about and for recommending these two women for promotion. Thank you all. May God bless you all, and may God protect our troops.

Defense Secretary Lloyd Austin was in the room; in fact, he spoke first at the event, introducing the four-star-general nominees.

Moments before forgetting his name, Biden -- reading from a teleprompter -- credited "Secretary Austin" with "taking on sexual assault and harassment and violence against women in the military."