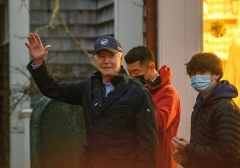 President Joe Biden goes out to lunch in Nantucket, Massachusetts, on November 26, 2021. (Photo by MANDEL NGAN/AFP via Getty Images)

On Friday, while vacationing in Nantucket, Biden insisted once again that it is the "patriotic responsibility" of all Americans to get vaccinated. But when a reporter asked the president if he's "thinking of any new mandates," Biden said, "No. Not -- not at the moment."

A reporter asked the president, "Are you concerned about the variant, Sir?"

"You’ve already gotten my release," Biden said, referring to a statement issued under his name earlier on Friday:

In that release, Biden announced air travel restrictions from South Africa and seven other countries: "These new restrictions will take effect on November 29. As we move forward, we will continue to be guided by what the science and my medical team advises."

Later, speaking to reporters, Biden said, "I've decided that we’re going to be cautious — make sure there is no travel to and from South Africa and six other countries in that region and — except for American citizens who are able to come back.

"But we don’t know a lot about the variant except that it is of great concern; it seems to spread rapidly. And we’re — I spent about a half hour this morning with my COVID team, led by Dr. Fauci.  And so that was the decision we made."

"Why not an immediate ban?" a reporter asked. "It’s going into effect on Monday, but why not do it now, like other countries have done?"

"Well, because that was the recommendation coming from my medical team," Biden said.

Biden 'was wrong with his mandate'

"Joe Biden ran for office basically hiding in his basement saying he could protect America from COVID. Well, he didn't. He can't. And more people have died of COVID under President Biden than did in all of 2020," Barrasso said.

Barrasso is a physician. He described himself as "pro-vaccine" and "anti-mandate."

"Vaccines work," Barrasso said on Sunday. "We have a new variant. There's going to continue to be new variants in the future. Medicines are better now than they have been.

But I think the president was wrong with his mandate. I think it was a monumental overreach. And I think it's actually hardened people against the vaccine. And the president has divided the country because of the mandate.

Now you have a couple of governors saying, oh, two shots isn't enough. Now you have to have three.

"The thing that are interesting about this, the last guest just talked about the inflation that we have. We have 10 million job openings in this country and yet the president, with his mandate, wants to fire people who have been going to work every day since the pandemic started. People who may not want to get the vaccine. Police officers, fire fighters, nurses, border patrol."

President Biden in September issued an executive order requiring all federal employees and federal contractors to be vaccinated.

And a few weeks later, he announced that his Labor Department would issue an emergency rule requiring companies with 100 or more employees to implement vaccination requirements for their workforces. The latter mandate is now working its way through the courts.