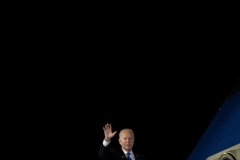 (CNSNews.com) - On Wednesday, President Biden appeared to know nothing about reported $450,000 payments to illegal aliens who were separated from their children during the Trump administration.

But by Saturday, the president had completely changed his tune, telling reporters he meant the $450,000 payment was not going to happen. Then he said the illegal aliens in question "deserve" some kind of payment:

"The president is in the loop," Richmond said:

And if you go back to the question, the question was from a FOX reporter asking about whether compensation for being separated and losing a child would be an incentive to come to America. And what he was saying was that was an absurd question from the beginning. No one is coming somewhere to lose their child, to be separated from their loved one.

And the question is so insensitive, disrespectful, that that's what he's commenting, too.

And I would ask a question of you, whether you support that. I mean, at some point, we cannot with a straight face say that parents are willing to separate from a child for a dollar amount. That's just not true. And we should not talk like that. We keep saying we're better than that, but we're not acting like that.

Hemmer asked what amount the Justice Department is considering as payment for people who crossed the border illegally and ended up being separated from their children, because children are not allowed in federal detention centers, which is where some parents were sent:

"But, again, the question is, we took children -- that President Trump took children from their parents and some children have never been returned. Do we think that's okay?"

Richmond said the Biden administration doesn't talk about dollar amounts: "That is the Department of Justice. The question about whether it is an incentive to come across to the United States to be separated from your child so that you can get paid is an absurd assumption.

Hemmer tried to clarify: "There will be a settlement, then, from this administration. That dollar amount to be determined, am I clear on that?" he asked Richmond.

"I understand that," Hemmer said. "But what you're saying is that you would be okay with payment of a certain amount, correct?"

"I don't approve or justify what the DOJ does," Richmond said.

"If the DOJ determines that it saves the taxpayers' money and it rights a wrong, then they will make the determination that is necessary. And I would assume if they make a determination, they'll come up with what they think is an adequate dollar amount."