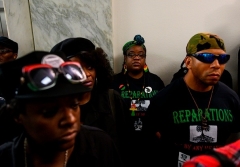 Activists wait to enter a hearing about reparations for the descendants of slaves before a House Judiciary Subcommittee on June 19, 2019. (Photo by ANDREW CABALLERO-REYNOLDS/AFP via Getty Images)

(CNSNews.com) - Robert Johnson, the billionaire founder of Black Entertainment Television, on Monday urged the nation to implement a $14 trillion reparations plan "in the form of direct cash payments, over the next 10 to 20 years, to every descendant of African American slaves."

He called it "the only way to unify this nation and achieve racial equality."

Johnson, after pushing his plan to give $350,767 to some 40 million African Americans, spoke with Fox News's Bret Baier on Monday evening:

I think there's a problem, and this is what I think is the cause: That white America has an inability to embrace the notion that the original sin of slavery done deserves some recompense.

And my argument is, there is no problem in trying to implement a cash payment to 40 million African-Americans to let them achieve equality of opportunity that has been denied to them over 200 years.

Johnson said the "fundamental cause" of the protests now rocking the nation "is the economic inequality that African-Americans as a whole face in this nation," and unless something is done about it, there will be future riots, he warned:

And the taxpayers will pay for this because -- for two reasons, particularly. One, it is an atonement for 200-plus years of slavery, desegregation, I mean segregation, Jim Crowism, and the denial of equal opportunity of rights. But the result of that payment would be to bring African Americans equal to white Americans in terms of opportunity, wealth and income.

So, instead of looking at it as a payment, look at it as an investment in 40 million African-Americans who deserve equal treatment and equal opportunity. And much of that investment is, if you were looking at any other investment, will come back to this country in the form of African Americans taking the responsibility to build their communities, to build their families, to become successful business people and entrepreneurs, to pay taxes, to contribute to society as they have done always, even without this form of compensation.

But unless white America recognizes the need for reparations to atone for this, this country will always be, as the Kerner Commission report said, separate and unequal.

Johnson agreed with host Bret Baier that reparations would be an "uphill battle politically," since neither President Trump, Senate Majority Leader Mitch McConnell nor former Vice President Joe Biden have endorsed it:

Well, it may be an uphill battle, but the last time we had slavery, that uphill battle led to civil war. And millions of Americans, brothers against brothers, fathers against sons, caused this country to lose its belief that it was an American exceptionalism that would provide opportunity to everyone.

So why not try what has been done in other parts of the world?

There were many Germans after World War II who never supported the Nazis, and whose children never supported the Nazis.  But they found it in their heart and in their mind of responsibility to provide compensation, reparations if you will, to millions of Jews. We gave reparations to Japanese Americans who were interned during World War II. You can even argue that land given to Indian Americans that was stolen from them by white settlers was reparation.

Johnson is not the only one talking about reparations.

At a town hall in Wilmington, Delaware with Joe Biden on Monday, several black community leaders raised the issue:

"Over the eight years you were vice president, there was lots of successes, but the African-American community did not experience the same economic opportunity, upward mobility, that they did in the '90s during your vice presidency, because we were hopeful and we saw a lot of great things with the first African-American president. However, that did not translate to commerce for--for African-Americans."

Brown told Biden, there "shouldn't be a study of reparations. It should be funding reparations."

Eugene Young with the Metropolitan Wilmington Urban League asked Biden what he plans to do for African American voters whom he described as "the main voting bloc of the Democratic Party."

"I know Senator Booker has the reparations bill in the Senate. And I know Sheila Jackson Lee is leading it in the House. What are--what are you plans around that?

"Because as I said before, the black people in this country have been lock in step with the Democratic Party. And we have to make sure that we're able to get something back for the vote that we give, because a vote is a transaction. And we're giving you our vote, and we're hoping for something in return, just like any other group does the exact same thing."

Biden talked about expanding "economic access," but he did not directly mention reparations.