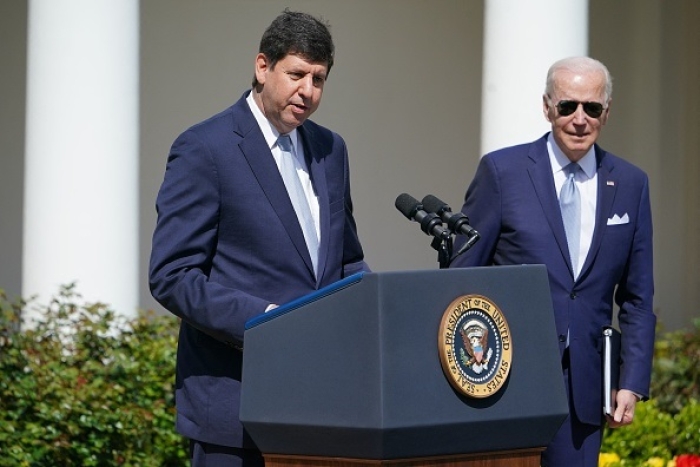 President Joe Biden stands with Steve Dettelbach, his nominee for Director of the Bureau of Alcohol, Tobacco, Firearms, and Explosives on April 11, 2022. (Photo by MANDEL NGAN/AFP via Getty Images)

(CNSNews.com) - Steven Dettelbach, President Biden's choice to head the Bureau of Alcohol, Tobacco, Firearms and Explosives (ATF) has advocated restrictions on so-called assault weapons, yet at his confirmation hearing on Wednesday, he could not or would not define what an assault weapon is.

It's an important question that could determine how many types of guns would fall under a potential "assault weapons" ban. A broad definition could ban most guns.

Sen. Tom Cotton (R-Ark.) reminded Dettelbach that in his 2018 campaign for attorney general, "you called for a ban on so-called assault weapons. What is an assault weapon? Could you define it for me?"

"Senator, I -- when I was a candidate for office, I did talk about restrictions on assault weapons. I did not define the term, and I haven't gone through the process of defining that term. That would only be for the Congress, if it chose to take that up, to do," Dettelbach responded.

"And if you chose to take it up, I would be at the ATF and there is perhaps expertise or data we could give you, so that you could make the appropriate decision to both protect the public and protect the Second Amendment."

Cotton followed up: "So -- so you're running for public office and you called for a ban on assault weapons, but you don't have a definition for assault weapons?"

"And on the other hand, you certainly don't want it be so broad so that it infringes unnecessarily on the rights of citizens. So I acknowledge that's a difficult task, but it would be for this body to do, not for me."

Cotton asked him, "Why is it so hard to define assault weapons?"

Cotton noted that in 1994, Congress tried to define "assault weapon."  "What did you think of that definition that Congress used?" the senator asked the nominee.

"I don't know enough about that -- that's a definition that I'm not particularly familiar with, and I haven't studied the data on how -- on that particular definition. I've heard comments on both sides of that, Senator. I acknowledge that's a very difficult issue. That is for this body to decide."

"I don't believe that's a category of -- of weapons that's labeled on the wall of retailers. It's not necessarily what retailers call it that would affect the decision of -- of a legislative body. But no, answer to your question," Dettelbach said.

He repeated that for him, the definition would be what lawmakers decide to make it.

"OK," Cotton said. "I think it's very telling that you're nominated to lead the ATF, and you don't have a definition of assault weapon. And the point is that there is really no such thing as a category of weapons known as assault weapons.

“There are rifles, there are shotguns, there are pistols. They have properties, they have features, but there is no such thing as a category of assault weapons," Cotton said.

In 1994, Congress passed a bill to "make unlawful the transfer or possession of assault weapons," and President Bill Clinton signed it into law. The ban lasted ten years, lapsing under President George W. Bush.

The law included a detailed description of features that define an "assault weapon" as well as a list of specific guns that met the criteria.

"You'll be in charge of overseeing this policy if confirmed. Define rogue gun dealer for me," Grassley said.

Dettelbach said, "I'm not familiar with any legal definition. I think you look at each case and you decide. You look at the facts and you decide, Ok, is this an intentional violation or not? Is this a repeated violation or not? Is it -- is it -- is it effective for the ATF to spend their time on this kind of violation, meaning does it go to the harm we're trying to protect the public from or not?"

Grassley asked Dettelbach, "Can you tell me what counts as a willful violation? Would it include a clerical error that would have been -- historically been treated with a warning?"

"Senator, to me as a lawyer, the word willful implies something more than an inadvertent error," Dettelbach said. "It implies an intentional misstatement. That's -- I haven't looked at the right -- at an individual case, but in general in the law, the term willful implies a high level of intent."

In response, the lobbying arm of the National Rifle Association asked if the true intent of Biden's order was to "simply shut down as many FFLs (Federal Firearms License holders) as possible."

"If there are 'rogue dealers,' as Biden calls them, that are intentionally selling firearms to people prohibited from purchasing firearms, they should lose their FFLs,” the NRA-ILA said.

“But that doesn’t mean that Biden should unleash the full force of federal regulators on FFLs who may have done something relatively innocuous, such as making unintentional bookkeeping errors."

ATF Nominee David Chipman Refuses to Define What Assault Weapons Are (May 28, 2021)