Arizona AG: 'Not Only Does Ukraine Deserve a Secure Border but So Do American Taxpayers' 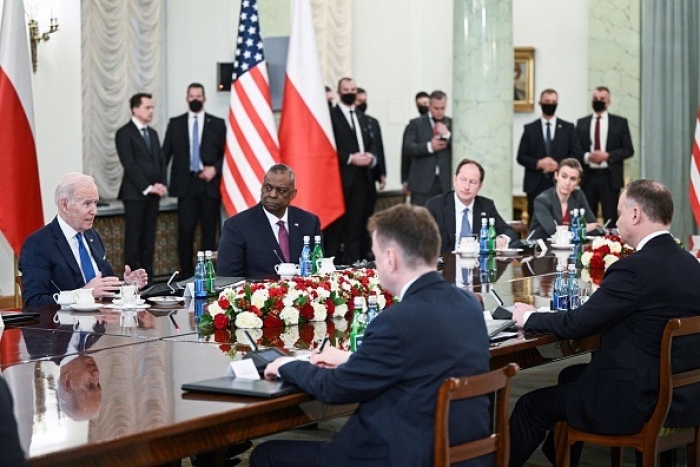 (CNSNews.com) - President Joe Biden rarely if ever speaks about the southern U.S. border, where illegal immigration is not only accepted but encouraged by the administration's failure to enforce U.S. immigration law.

But speaking in Poland on Saturday, Biden did bring up the U.S. border, telling the Polish president:

"The fact that you have so many -- so many Ukrainians seeking refuge in this country of Poland -- we understand that, because we have in our southern border thousands of people a day, literally not figuratively, trying to get into the United States," Biden said. "But we believe that we, the United States, should do our part relative to Ukraine as well by opening our borders to another 100,000 people."

Arizona Attorney General Mark Brnovich, a Republican, blamed both border crises on Biden himself: "Shame on Joe Biden for not recognizing that not only does Ukraine deserve a secure border, but so do American taxpayers," Brnovich said on Monday.

"People are dying in Ukraine. It's a terrible tragedy -- but literally Americans are dying as a result of the catastrophe that the Biden administration has wrought upon all of America," Brnovich told "Mornings With Maria."

"He literally has allowed the cartels and the gangs to seize control of our borders, and as a result, millions of people are flooding into our country illegally, which is stressing the social services and our safety net. And additionally, we note that the price of drugs like fentanyl and methamphetamine are dramatically declining because Joe Biden has let the cartels seize control of our border."

Russians and Ukrainians are among the world's people now showing up at the open U.S. border.

Brnovich said he's not so worried about the Ukrainians: “What worries me is people from Middle Eastern countries that are sneaking into America in the middle of the night -- people from places like Iran and Afghanistan are just being released into our communities. Because at the end of the day, border security is national security."

The Biden administration is preparing, perhaps as soon as this week, to end the Title 42 public health order that has kept some would-be border-crossers out of the country because of the COVID pandemic. Lifting that CDC order will only exacerbate an already out-of-control problem, Brnovich said. He predicted that lawsuits are sure to follow:

"So, yes, anything Biden administration does that endangers our American community is going to end up, quite frankly, in litigation." Brnovich said there are multiple lawsuits pending, "and we're going to continue to do that."

"And I think, once again it's important to put all of this in context. In the last year of the Trump administration, March, about 34,000 people illegally entered our country, and this year we are expecting more than 200,000, and you know, I am not a math whiz -- but literally, those are astronomical and historical numbers. And it's because the Biden administration is not using the tools it has in its toolbox, including using Title 42, as the Trump administration did."

Brnovich said he recently argued a case before the Supreme Court involving welfare benefits for noncitizens:

In addition to lawsuits, Brnovich recently issued an opinion saying that what the cartels are doing "does constitute an invasion, which provides more tools in policymakers' toolboxes, allowing the governors to continue to build the border wall, to deploy DPS and National Guard resources to apprehend those cartel and gang members and repatriate them back to Mexico."

Brnovich said the Biden administration has the power and needs to use it to solve the problem by "enforcing the law as it is."