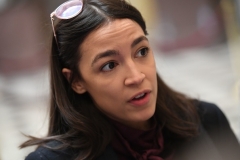 (CNSNews.com) - Rep. Alexandria Ocasio-Cortez (D-N.Y.) told CNN Thursday night she skipped Joe Biden's inauguration for two reasons: She wanted to be with workers in the South Bronx who are fighting for a minimum wage increase; and "we also had very real security concerns as well...we still don't yet feel safe around other members of Congress," she said.

In the course of her conversation with CNN's Chris Cuomo, Ocasio-Cortez also called for the expulsion of Republican Sens. Ted Cruz and Josh Hawley for, in her words, helping to "support" the Jan. 6 "insurrection."

She said if Republicans want to delay the impeachment trial of Donald Trump, "Let's bring up a vote to expel Ted Cruz and Josh Hawley from the Senate. If we've got time on our hands, then we should be actually bringing justice to the members of Congress and the members of the Senate who also helped support this insurrection."

Host Chris Cuomo told Ocasio-Cortez the Biden inauguration "was supposed to be a show of force and unity, and you weren't there. Explain it."

"Yeah, you know, I think we also had very real security concerns as well. As you mentioned earlier, we still don't yet feel safe around other members of Congress," she said.

"Do you really think colleagues of yours in Congress may do you dirty?" Cuomo asked.

"Yeah, well, one just tried to bring a gun on the floor of the House today," she said, basing her information on press reports. “Why does a member of Congress need to sneak a gun onto the House floor?”

Cuomo asked Ocasio-Cortez if the lawmaker in question might have been carrying a gun "to protect all of you from, you know, insurrectionists like we saw a couple of weeks ago, or do you think there really is a chance that you may be the enemy?"

And so I don't really care what they say their intentions are. I care what the impact of their actions are. The impact is to put all 435 members of Congress in danger. You know, he tried to hand off his gun to another member who didn't have a license, and any responsible gun owner knows that you don't just hand off your gun to another individual. You have to clear it, etcetera.

On the topic of impeachment, Ocasio-Cortez said she doesn't think House Speaker Nancy Pelosi "has any intention of giving President Trump a pass.”

Asked about reports that the Senate trial may be delayed until February, Ocasio-Cortez said any delay should not "get in the way of justice."

"However, hey, if they want to delay it, let's bring up a vote to expel Ted Cruz and Josh Hawley from the Senate," said the non-senator. "If we've got time on our hands, then we should be actually bringing justice to the members of Congress and the members of the Senate who also helped support this insurrection.”

She added, "If they don't resign they should be expelled."

For the record, neither Sen. Hawley nor Cruz advocated “insurrection” or overturning the results of the 2020 election.

Hawley said he would vote against certification of the Electoral College tally because it was the only way to air his and his constituents' concerns about problems with the election and have a chance to debate it, as the law and Constitution allow.

Cruz and other Republican senators advocated a 10-day delay in congressional certification to make time for an audit of the results in swing states.

Seven Senate Democrats have now filed an ethics complaint against Cruz and Hawley.