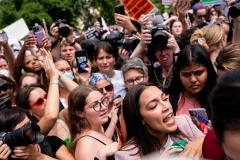 Rep. Alexandria Ocasio-Cortez (D-N.Y.) speaks to abortion rights activists outside the US Supreme Court on June 24, 2022. (Photo by STEFANI REYNOLDS/AFP via Getty Images)

"But we can only do it if we're not fighting with one hand tied behind our back, let alone two. And so I think that right now, we just need a fight. We need a fight.

“And we need to show and demonstrate to the American people that when they vote to give Democrats power, we will use it to the fullest extent possible to defend everybody's civil, economic, and human rights.” (Wild cheers and applause).

Ocasio-Cortez, a New York Democrat, said the U.S. Supreme Court has "over-reached" and "delegitimized" itself by overturning the Roe v. Wade ruling and sending abortion decisions back to the states.

"What do you mean when you say delegitimized?" Colbert asked her.

"So what that means is, the Supreme Court has a power,” Ocasio-Cortez explained:

“Its power is in whether its rulings are heeded and respected, and if so, how much and to what extent. And when we have the framing of you know-- the framing of our government -- the presidency, Congress-- the president, Congress, and the Supreme Court are supposed to be three co-equal branches, co-equal, none with supremacy over the other.

"And when any one of those branches overreaches its authority, it is the responsibility of the other two to check the overreach of that authority.

"The Supreme Court has engaged in the over-reaching of its authority (applause) in denying the human and civil rights of any pregnant person or person that could become pregnant in the United States of America.

"They have engaged in over-reach, and it is the responsibility of the president and Congress to put the Supreme Court in check, because they have delegitimized themselves.” (Cheers and applause).

Ocasio-Cortez reached back in history to make her point that the Supreme Court's "over-reach" can be checked:

"Well, I think that history really informs a lot. And it gives us lessons here," Ocasio-Cortez said:

"Because this is not the first time that this has happened. In the 1800s, the Supreme Court was taken over by the Confederate South and was starting to rule in ways that limited Abraham Lincoln, for example.

"In the Dred Scott ruling, they ruled that black Americans are not and never can be full citizens of the United States. And what did Abraham Lincoln do? He signed the Emancipation Proclamation. He ignored the gross over-reach and abuse of power.

"Anyway, with the New Deal, what we saw was an overreach from the Supreme Court attempting to prevent us from passing these laws. And Franklin Delano Roosevelt threatened to expand the court.

“And in his adoption of that position, despite the fact that Congress didn't do it at that time -- although Lincoln did -- the fear of the court's power being minimized caused them to back off their over-reach and abuse of power."