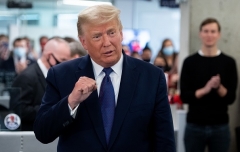 President Trump at his campaign headquarters in Arlington, Virginia on Election Day. (Photo by Saul Loeb/AFP via Getty Images)

(CNSNews.com) – President Trump declared early Wednesday that as far as he was concerned he has won a second term, expressing frustration that battleground states where he’s leading have not been called for him.

Speaking to supporters in the East Room of the White House, Trump indicated plans to go to the Supreme Court in a bid to get “all voting to stop.”

He said that in the key states of Pennsylvania, Michigan, Wisconsin, Georgia, and North Carolina he was leading by sizeable margins.

He highlighted Pennsylvania, where he said he was leading by 690,000 votes.

“These aren’t even close, it’s not like, oh it’s close. With 64 percent of the vote in, it’s going to be almost impossible to catch, and we’re coming into good Pennsylvania areas where they happen to like your president,” he said. “So we’ll probably expand that.”

No media organization has called a winner in those states, some of which are still awaiting millions of mail-in ballots.

Trump was clearly unhappy about that.

“So our goal now is to ensure the integrity, for the good of this nation,” he continued. “This is a very big moment. This is a major fraud on our nation. We want the law to be used in a proper manner.”

“So we’ll be going to the U.S. Supreme Court. We want all voting to stop. We don’t want them to find any ballots at 4 o’clock in the morning and add them to the list, okay?”

“It’s a very sad moment,” Trump said. “And we will win this – and as far as I’m concerned, we already have won.”

Around 3:30 AM eastern time, the Associated Press tallies in the states Trump referred to were as follows:

Michigan: Trump was leading by more than 273,000 votes, with 75 percent reporting

Pennsylvania: Trump was leading by more than 675,000 votes, with 64 percent reporting

Wisconsin: Trump was leading by more than 108,000 votes, with 94 percent reporting

Georgia: Trump was leading by more than 102,000 votes, with 94 percent reporting

North Carolina: Trump was leading by more than 76,000 votes, with 94 percent reporting

Moments after the president spoke, CBS News anchor Norah O’Donnell accused him of “falsely claiming that he has won the election and disenfranchising millions of voters whose ballots have not been counted.”

“Sadly, because of the raging pandemic and the failures of the administration to contain the pandemic, there has been a massive vote-by-mail operation and those votes have not yet been counted,” she said.