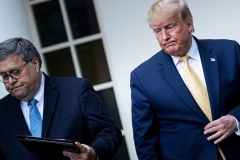 Earlier in the day, the Department of Justice accused Todd of “deceptive editing,” prompting NBC to admit having “inadvertently and inaccurately cut short” the clip, adding “we regret the error.”

In a segment on “Meet the Press,” Todd played a clip in which Barr, during an interview with CBS News’ Catherine Herridge on Thursday, was asked how he thought the history of the Flynn decision would be written.

“Well, history’s written by the winners,” Barr began with a chuckle. “So it largely depends on who’s writing the history.”

That’s where the edited clip as shown on the NBC show ended. Todd, who had earlier prepared viewers to “wait until you hear this answer,” declared that he was struck by its “cynicism.”

“It’s a correct answer,” Todd said. “But he’s the attorney general. He didn’t make the case that he was upholding the rule of law. He was almost admitting that, yeah, this is a political job.”

A fuller version of the CBS interview, however, shows that Barr had in his very next words said precisely what Todd accused him of not having said – that the move to dismiss charges against Flynn “upheld the rule of law.”

“Well, history’s written by the winners. So it largely depends on who’s writing the history, but I think a fair history would say it was a – it was a good decision because it upheld the rule of law. It helped – it upheld the standards of the Department of Justice, and it undid what was an injustice.”

“Compare the two transcripts below,” Kupec said. “Not only did the AG make the case in the VERY answer Chuck says he didn’t, he also did so multiple times throughout the interview.”

More than six hours later, NBC in a tweet responded to the DOJ criticism:

“You’re correct. Earlier today, we inadvertently and inaccurately cut short a video clip of an interview with AG Barr before offering commentary and analysis. The remaining clip included important remarks from the attorney general that we missed, and we regret the error.”

In his subsequent tweet, Trump suggested he did not buy the argument that the “error” was inadvertent.

“Sleepy Eyes Chuck Todd should be FIRED by ‘Concast’ (NBC) for this fraud. He knew exactly what he was doing. Public Airwaves = Fake News!”

Critics of the president are appalled by the DOJ decision to drop charges against Flynn, a move that came after Barr appointed a new prosecutor to review the politically-charged case.

House Judiciary Committee Chairman Jerrold Nadler (D-N.Y.) in reaction to the decision described the DOJ as “politicized and thoroughly corrupt,” and called for an investigation by the department’s inspector general.

In his CBS interview, Barr disputed that he had acted at the bidding of the president, saying that he was “doing the law’s bidding.”

Barr said he was prepared to take flak for the decision, but added, “I also think it’s sad that nowadays these partisan feelings are so strong that people have lost any sense of justice.”

“And the groups that usually worry about civil liberties and making sure that there’s proper procedures followed, and standards set, seem to be ignoring it and willing to destroy people’s lives and see great injustices done.”

Flynn, a former Defense Intelligence Agency chief, resigned from his post as national security advisor just days into the new administration, after the White House determined he had misled Vice President Mike Pence about a conversation with the then-Russian ambassador to the U.S. – before Trump’s inauguration – about U.S. sanctions over Russian interference in the 2016 election.

Flynn pleaded guilty of making false statements to the FBI but last January filed a motion to change his plea and for the court to dismiss his case.

He argued among other things that he would never have entered the guilty plea had his then-lawyers informed him that the FBI agents involved in the controversial White House interview four days after the inauguration had reported afterwards they believed there was no indication that he was lying to them. Flynn fired his lawyers last June and hired Sidney Powell to represent him.

Recently-released evidence showed the FBI had gone to Flynn’s office hoping to trap him in a lie – an attempt that came after, and despite, the agency’s determination that it was ready to close a counterintelligence investigation into Flynn for lack of evidence of wrongdoing.

After the DOJ decision was announced last week, Powell called the treatment of her client “a deliberate, malevolent, concerted effort to destroy an honest man.”