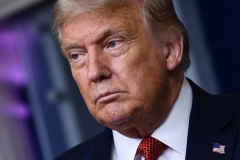 President Trump speaks to the press at the White House after Monday’s incident. (Photo by Brendan Smialowski/AFP via Getty Images)

(CNSNews.com) – U.S. Secret Service agents ushered President Trump out of a press briefing at the White House on Monday evening following an incident in which a man claiming to be armed was shot by a Secret Service officer nearby.

Just minutes into the briefing, Trump was interrupted and swiftly led from the room. He returned around ten minutes later to continue, telling the press corps a person had been shot by Secret Service personnel outside of the White House perimeter fence and had been taken to hospital.

He thanked the Secret Service “for doing their always quick and very effective work.”

Trump said in response to a question that he had been escorted to the Oval Office, not to the White House bunker.

Asked if he was rattled by the incident, Trump shrugged, “I don’t know, do I seem rattled?”

“It’s unfortunate that this is a world – but the world’s always been a dangerous place. It’s not something that’s unique.”

Trump then proceeded to brief the media for another 50 minutes.

A Secret Service officer in position outside the Brady Briefing Room as the White House is locked down during an incident on Monday evening. (Photo by Brendan Smialowski/AFP via Getty Images)

During the incident at Pennsylvania Avenue and 17th Street NW, armed Secret Service agents in black uniforms were seen rushing across the North Lawn of the White House.

“He then crouched into a shooter’s stance as if to fire a weapon,” he said. “The Secret Service officer discharged his weapon, striking the individual in the torso.”

Sullivan said officers immediately gave the suspect first aid, emergency services were called to the scene, and both the suspect and uniformed officer were transported to a local hospital.

“The White House Complex was never breached during the incident nor were the Secret Service protectees ever in danger.”

Sullivan said the Metropolitan Police Department had been contacted to conduct an investigation, and the Secret Service Office of Professional Responsibility would be carrying out an internal review of the officer’s actions.

He said he would not be taking questions, “since the investigation is still ongoing.”