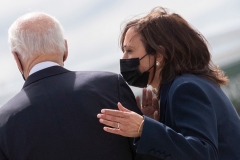 (CNSNews.com) – An email purportedly from a member of the White House communications team instructs federal agencies to refer to the “Biden-Harris Administration in official communications,” the latest indication of what appears to be a concerted effort to emphasize the role and maximize the visibility of Vice President Kamala Harris.

“Please be sure to reference the current administration as the ‘Biden-Harris Administration’ in official public communications,” reads the directive, leaked by an employee of an unnamed federal agency to the website Outspoken, a project of Log Cabin Republicans.

Outspoken said in a report Tuesday that the language now appears on the websites of all 15 executive departments, from Agriculture to Veterans Affairs.

Other examples of recent usage by federal agencies or administration officials include:

--A United States Department of Agriculture release on March 22 said, “In the Biden-Harris Administration, USDA is transforming America’s food system …”

--White House Press Secretary Jen Psaki uses the term regularly during press briefings, including in her very first briefing on inauguration day, when she said, “When the president asked me to serve in this role, we talked about the importance of bringing truth and transparency back to the briefing room, and he asked me to ensure we are communicating about the policies across the Biden-Harris Administration and the work his team is doing every single day on behalf of all American people.”

--Official communications from the White House press office are peppered with the phrase, including, in the last week alone:

Mar. 23: “The Biden-Harris Administration’s program has made vaccines available in over 800 pharmacies to date.”

Mar. 19:  “The Biden-Harris Administration is partnering with 25 Health Centers to provide …”

Mar. 18:  “… supporting Americans who are facing housing challenges is a top priority for the Biden-Harris Administration.”

Mar. 18:  “…  to discuss the Biden-Harris Administration’s whole-of-government approach to tackling the climate crisis”

President Trump sent Vice President Mike Pence to Europe in 2017 to assure allies that the U.S. was committed to the transatlantic alliance, and the same year Pence took a lead in relations with the anti-Maduro opposition in Venezuela, led by Juan Guaido, whom the U.S. and dozens of other countries regard as the legitimate interim president.

Pence chaired a U.N. Security Council meeting in 2017, scathingly criticizing the U.N. Human Rights Council as a body that “doesn’t deserve its name.” He was also heavily involved in efforts to get Turkish President Recep Tayyip Erdogan to release American pastor Andrew Brunson, and was frequently in the room when Trump met with visiting world leaders.

Still, administration agencies and officials generally referred to “the Trump Administration.”  The term “Trump-Pence Administration” was if anything used more often by critics – such as LGBT rights advocates who sought to emphasize the role of Pence, a conservative Christian.