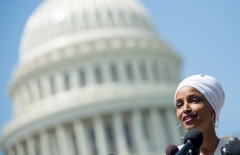 (CNSNews.com) – The House of Representatives late on Tuesday night passed a bill to create a special envoy on “Islamophobia,” after a sometimes heated debate in which Republicans criticized the legislation for failing to define the concept.

“This word appears nowhere in the federal statutes,” said Rep. Michael McCaul (R-Texas). “It is so vague and subjective that it could be used against legitimate speech, for partisan purposes.”

Republicans argued that without defining Islamophobia, the bill risked threatening free speech, and that someone could be accused of “Islamophobia” when, for example, calling out blasphemy law abuses or the mistreatment of women whose proponents cite Islamic teachings to justify their policies or behavior.

During the earlier House Foreign Relations Committee markup, Democrats voted down GOP amendments including one proposing that “legitimate criticism” should be excluded from speech that could be deemed Islamophobic.

The Combating International Islamophobia Act, authored by Reps. Ilhan Omar (D-Minn.) and Jan Schakowsky (D-Ill.), would create an “Office to Monitor and Combat Islamophobia” at the State Department, headed by a special envoy. It would also require the department to include specific data relating to Islamophobia in its annual human rights and international religious freedom reports.

After several rounds of debate, a roll-call vote was postponed until shortly before midnight, when the bill passed along party lines, by 219 votes to 212.

While arguing in favor of the bill, some Democrats raised former President Trump’s controversial travel proclamations – even though what detractors labeled a “Muslim ban” was built on security concerns determined under the Obama administration.

Rep. Judy Chu (D-Calif.) said that a special envoy to monitor and combat Islamophobia was needed because anti-Muslim prejudice was spreading across the world.

“The violence and repression would not be possible without the propaganda that paints all Muslims as dangerous,” Chu said. “We’ve seen that even in our own country, where a lie that Muslims are dangerous was used to justify a Muslim ban.”

After citing some of Trump’s comments about Muslims before he was elected in 2016, McGovern said, “As president, he instituted a Muslim ban. So that is the Republican Party’s recent history in terms of combating Islamophobia.”

“Instead of combating it, he, again, threw gasoline on the fire and fanned the flames,” he said. “And so the reason why this is important is so we can show the world that that’s not who we are, that we reject bigotry and hatred and discrimination and prejudice wherever it exists.”

He pointed out that the seven countries named in Trump’s original executive order (E.O. 13769) “were actually countries that were determined by Congress and the Obama administration to be countries of particular concern for terrorism activity, pursuant to the Visa Waiver Improvement and Terrorist Travel Prevention Act of 2015.”

Reschenthaler said the so-called “Muslim ban” applied to countries accounting for just eight percent of the world’s Muslims, and included only one of the ten most populous Muslim countries, Iran.

He concluded by recalling that the Supreme Court majority found that Trump’s travel proclamation was “facially neutral toward religion” and that the administration had “set forth a sufficient national security justification.” 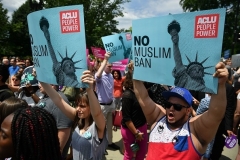 Protesters rally against President Trump’s travel proclamation in front of the Supreme Court in 2018. (Photo by Mandel Ngan/AFP via Getty Images)

Those same seven countries had been identified the previous year by the Obama Department of Homeland Security as countries of concern regarding terrorism threats, with implications for visa-free travel – Iran, Iraq, Sudan, and Syria in January 2016, and Libya, Somalia, and Yemen a month later.

E.O. 13769 was later superseded by E.O. 13780 (which dropped Iraq from the original list) and by presidential proclamation 9645 (which removed Sudan, and added Chad, as well as some classes of visitor from Venezuela and North Korea.)

The five Muslim-majority countries affected by presidential proclamation 9645 – Iran, Libya, Somalia, Syria, and Yemen together have a population of around 132 million, or about eight percent of the world’s estimated 1.6 billion Muslims.

The Organization of Islamic Cooperation has 57 members, and the 52 OIC members that were not affected by Trump’s proclamation include the world’s most populous Muslim countries – Indonesia, Pakistan, Nigeria, Bangladesh, Egypt and Turkey – which together account for more than half of the world’s Muslims.

Republicans: If a Special Envoy is to Monitor and Combat ‘Islamophobia’ It Needs to be Defined (Dec. 10, 2021)