(CNSNews.com) – As Sen. Kelly Loeffler and her Democratic challenger in one of two pivotal Georgia Senate runoffs faced each other across a debate stage in Atlanta on Sunday, the contrast in their views on abortion was on full display.

Loeffler twice accused Raphael Warnock, the pastor of Atlanta’s Ebenezer Baptist Church, of using the Bible to justify abortion – without drawing a reaction, until the moderator, Fox 5 Atlanta’s Russ Spencer, pressed him to “respond to the abortion issue in particular.”

When he did, Warnock did not refer to the Bible, focusing instead of the issue of a woman’s right to decide whether or not to abort her baby, and the inappropriateness in his view of the government having a say in the matter.

“Listen, I have a profound reverence for life, and an abiding respect for choice,” he said. “The question is, whose decision is it? And I happen to think that a patient’s room is too small a place for a woman, her doctor, and the U.S. government. I think that’s too many people in the room.”

“But those who are concerned about life – and I certainly am – ought to be focused on the incredibly high rates of infant mortality, and maternal mortality in our country when compared to other developed nations,” he continued. “That’s something the government can work on, and I’ve been working on it my entire career.”

In her comments, Loeffler said Warnock had “used the Bible to justify abortion,” adding, “I’m not going to stand by and let Georgians not know who my opponent is, how radical his views are, and how he would fundamentally change our country. He’s out of step with Georgia’s values.” 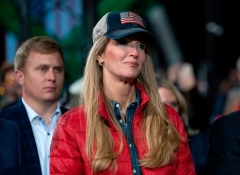 Later she said again, “I’m not going to be lectured by someone who uses the Bible to justify abortion.”

Commenting afterwards, the pro-life Susan B. Anthony List said Warnock’s “radicalism is deeply disturbing and far outside the American mainstream.”

“Senator Loeffler, by contrast, has used her platform to promote compassionate, popular pro-life legislation that upholds the dignity of life and protects women. We are thankful for her pro-life, pro-woman leadership.”

Loeffler and Warnock are facing off in next month’s runoff to fill the seat to which Loeffler was appointed last January to replace retiring Sen. Johnny Isakson.

Republican Sen. David Purdue and Democrat Jon Ossoff are vying for Georgia’s other Senate seat in the runoff, neither having captured 50 percent of the vote on November 3. The outcome on January 5 could decide whether or not the Senate remains under Republican control.

After the PPAF endorsement in May, he tweeted: “I have been an advocate for reproductive justice my entire life. As a U.S. Senator, I promise to fight for and protect access to reproductive health care. I’m honored to have the support of [PPAF] as we fight to restore the soul of our nation.”

PPAF described him as “a passionate advocate for reproductive rights,” who “has called for greater access to birth control and safe, legal abortion — and will fight abortion bans and restrictions in the U.S. Senate.”

On the other hand, PPAF labeled Loeffler “a staunch opponent of abortion access,” noting that since her appointment in January “Loeffler has sponsored and co-sponsored multiple bills restricting and banning abortion.”

After the November election set the stage for a January runoff, NARAL Pro-Choice America president Ilyse Hogue said the group looked forward to “continuing our work to make sure [Warnock] is elected in January.”

“Abortion rights are under threat like never before thanks to anti-choice, anti-freedom Senate Republicans like Sen. Kelly Loeffler who rubber-stamped Trump’s dangerous agenda and stacked the U.S. Supreme Court with ideologues hostile to Roe,” she said, referring to the Supreme Court’s 1973 decision that legalized abortion.